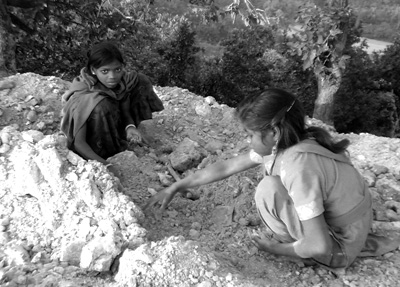 Across the world, millions of children do extremely hazardous work in harmful conditions that prevents them from getting an education and is harmful to their physical, mental, or social development. Every day, an estimated 152 million children (Global Estimates of Child Labour: Recent Trends 2012-2016, ILO) work as child labourers, in farms, fields, factories, homes, streets and battlefields. Out of these 64 million are girls and 88 million are boys.

The term ’child labour’ is often defined as work that deprives children of their childhood, right to free existence and education and work which harm their physical and mental development. It refers to work that is mentally, physically, socially or morally dangerous  and harmful to children and interferes with their schooling by

In its most extreme forms, child labour involves children being enslaved, separated from their families, exposed to serious hazards and illnesses and/or left to fend for themselves on the streets of large cities often at a very early age. Whether or not particular forms of ‘work’ can be called as ’child labour’ depends on the child’s age, the type and hours of work performed, the conditions under which it is performed and the objectives pursued by individual countries. The answer varies from country to country, as well as among sectors within countries.

According to International Labour Organization (ILO) Convention No. 182, “the worst forms of child labour” include:

Global March thus is not only advocating for zeroing child labour across the world, but also focusing special attention to girl child labourers and children trapped in exploitative work in agriculture.

According to the Protocol to Prevent, Suppress and Punish Trafficking in Persons, Especially Women and Children (2000), child trafficking is the recruitment, transportation, transfer, harbouring or receipt of children for the purpose of exploitation. It is a violation of their rights, their well-being and denies them the opportunity to reach their full potential.

At least 1.2 million children ( ILO, 2002- Every Child Counts, New Global estimate on Child Labour) are trafficked annually for child labour and sexual exploitation. Most child labourers are in the informal economic sector, where they are not protected by laws and regulations. The worst forms of child labour are illegal and must be eradicated immediately. While recent research has yielded information on the nature of child trafficking, little is known about its magnitude.

To reduce vulnerabilities that make children susceptible to trafficking and child labour, Global March assists governments in strengthening laws, policies and services including legislative review and reforms, establishing minimum labour standards, and supporting access to education. Global March also works with communities to change norms and practices that exacerbate children’s vulnerabilities to trafficking and entering into child labour right from its source- in the villages at the grass root level.