‘Parliamentarians Without Borders for Children’s Rights’ (PWB) is an active group of about 100 members of Parliament from 30 countries, founded by Nobel Peace Laureate 2014 and Honorary President of Global March Against Child Labour(Global March), Mr. Kailash Satyarthi, and Brazilian Senator Cristovam Buarque PhD. to bring together members of Parliament from different continents on the issue of children rights.

Since its inception in 2015, PWB has organised three global meetings (in Nepal in 2015, Netherlands in 2016 and Belgium in 2018), three regional meetings (first Asia meeting in Bangladesh in 2017, second Asia meeting in Sri Lanka in 2018 and first Africa meeting in Togo in 2018) and as well as one sub-regional meeting for Francophone African countries in Togo in 2019, bringing together 100 active Members of Parliament from 30 countries, which is increasing every year. In addition to the global and regional meetings, country level chapter meetings have also been organised in India, Bangladesh, Togo, Ghana, Tanzania, Sri Lanka and Pakistan which has seen participation of close to 150 MPs from these different countries.

The PWB meetings have been used as a platform to discuss legislators’ role in addressing critical issues of ending child labour and trafficking, promoting education for children by breaking barriers, creating child responsive budgeting and need for greater investments in children, tackling child labour in supply chains, child labour in agriculture and domestic work among others.

Global March strives to conduct regular awareness raising and sensitising dialogues with MPs- online and offline and is working towards raising capacity of its members across the world to liaise effectively with their legislators.

Parliamentarians Without Borders for Children’s Rights (PWB) fights for children. It uses its position to advance the situation of children all over the world and safeguard their rights. PWB are personal leaders in the fight for children’s rights and increase support for children’s issues in their constituencies, countries and regions.

PWB group gives Parliamentarians the opportunity to address the issues of children’s rights by:

To strengthen the political will, Mr. Satyarthi has engaged with numerous Members of Parliament during his visits to countries in Asia, Africa and Latin America and urged them to become child rights champions and dedicate atleast one day for discussion on children’s issues in their respective Parliaments. Mr. Dilli Bahadur Chaudhary, the MP from Nepal has also carried out a trip across South Asia to meet Members of Parliament from Pakistan, India, Bangladesh and Sri Lanka, engaging them into dialogues on children’s rights and persuading them to become members of Parliamentarians Without Borders for Children’s Rights. Mr. Satyarthi has also been invited as a keynote speaker at the Inter- Parliamentary Union IPU)’s at its 136th General Assembly held in Dhaka in 2017, where he urged MPs to make child related SDGs their priority and invest in education of children.

Initiatives by Members of PWB

Taking forward the discussions and commitments made during the global and regional meetings, the members of PWB group are continuing the advancement of their mandate to serve the citizens of their countries and are taking pertinent efforts to promote and protect the rights of children, especially that of the girl child.

The result of such meetings and engagements has led to a number of constructive measures and initiatives taken by MPs across the world. Such as:

In Togo, with the assistance from Global March member, WAO-Afrique, the Togolese chapter of PWB was initiated with the name of ‘Parliamentarians Sans Frontiers Pour Le Droits De L’Enfants (PSF-Togo)’ which has conducted several meetings and activities till now involving more than 40 members of Parliament from Togo on the issue of eradicating child labour and promoting skill based education etc. PSF Togo also developed an action plan for carrying forward the work by MPs in the country and implemented it successfully in 2017. The MPs from Togo have shown great commitment to further the cause of children not only in their country but also in the Francophone Region, having also carried out an exchange and learning visit to Benin in 2018. They were also instrumental in supporting the First Africa Sub-Regional Meeting (Francophone) of MPs in 2019.

In Tanzania, a young MP, Mr. Hamidu Bobali formed the ‘Parliamentarians Without Borders for Children’s Rights- Tanzania Chapter’ with the technical guidance from Global March member, ANNPCAN Tanzania, which has been endorsed by the Speaker of the Parliament and has carried out two meetings for establishing its constitution, working scope and by-laws. In Sri Lanka, the Sri Lankan MP, Mr. Aravind Kumar Arunachalem has established and organised the first meeting of the ‘Parliamentarians Without Borders for Children’s Rights- Sri Lanka Chapter’ with the support of Global March member, CCH Sri Lanka to address children’s issues such as child domestic work, sexual abuse of children among others. Lastly, in Bangladesh, with the support of Global March member, Bangladesh Shishu Adhikar Forum, the first kick off meeting of ‘Parliamentary Caucus for Children’s Rights’ was organised in Dhaka recently and 16 MPs participated across party lines to talk on issues of child labour and education of children.
Over the years, as a result of continued advocacy towards the MPs combined with the initiatives shown by few committed child rights MPs, PWB country level chapters have also been established in countries like Togo, Tanzania, Bangladesh, Pakistan and Sri Lanka.

Since the onset of COVID-19, members of PWB across various countries have been taking measures to provide for masks, sanitisers, hygine kits and have facilitated provision of relief materials to affected families and children.

For example, Mr. Patwary of Bangladesh distributed basic necessities to 1000 families in his constituency and distributed masks, sanitisers and other protective gears to 300 doctors and nurses. He also participated in the Youth Policy Forum’s politician’s panel to discuss the ongoing COVID-19 crisis, where he suggested that students should be given interest-free loans or direct cash transfers and more of the education budget should be allocated to developing technical skills in the youth to combat the problem of unemployment. Mr. Arunachalem of Sri Lanka donated relief materials worth Rs.19 Lakh to the community members in his constituency from his own funds. Ms Sarah Ahmad, who is an active chairperson of the Child Protection and Welfare Bureau of the Punjab province in Pakistan, in the wake of the COVID-19 pandemic, took immediate measures to protect street children in Lahore by sending them to shelter homes and by launching an awareness campaign against the begging mafia in Pakistan. She continued her work of rescuing children from child labour and abuse, and repatriating them with their families along with COVID-19 relief distribution amongst the disadvantaged communities in her constituency. In Togo, the country chapter of PWB distributed hygiene kits to 100 vulnerable and street children. 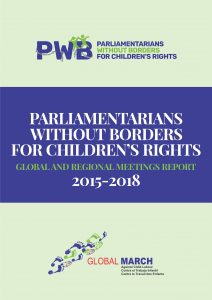 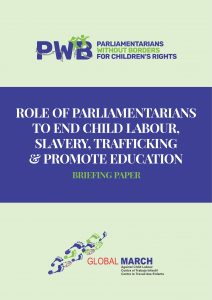