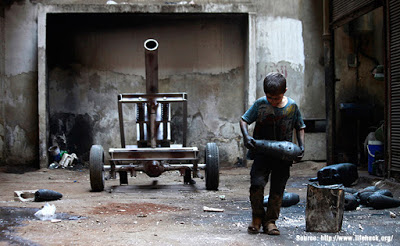 In today’s volatile world, more than 100 million people are in an urgent need of humanitarian assistance, of which 50 percent are children. More than 60 million people have been displaced and are facing extreme situations due to conflict, emergencies and natural disasters. Some of the major consequences of these are mass displacement, separation of families, loss of parents, lack of opportunities in the formal labour market, increased poverty, and greater chances of children going missing and becoming invisible. Prone to more vulnerability, children in such delicate times remain the worst sufferers who continue to be attacked, used as combatants, abused physically and sexually, raped and forced into some of the most abusive forms of work such as sex slavery and soldiering. UNICEF estimates that 50-60% of the population affected by disasters is children and nearly a billion children live in countries that were affected by conflict in 2013 or 2014 alone. However, lack of basic preparedness standards during natural or man-made disasters, and the emergency preparedness plans that do exist, have often failed to address the needs of the children, hence intensifying the need for child-friendly crisis plans and policies.

Given the mentioned backdrop, in the absence of educational systems for children, due to legal and social barriers to employment for adults and cultural inappropriateness for women to work, millions of children go missing into the shackles of bonded or forced labour in the hopes that resources gained will enable other family members to survive. Moreover, there are a large number of children that migrate unaccompanied and eventually find themselves in the worst forms of child labour. These children who are breadwinners of their families or who are trafficked and forced into slavery, are often labelled as ‘invisible or missing children’.

Due to the ongoing conflict in Syria, it is estimated that 1 in 10 Syrian refugee children in the region are engaged in child labour. Children affected by the conflict are at serious risk of becoming trafficked, abused, exploited, raped and in some cases beaten to death. Millions are out of school and it is feared that Syria is losing a whole generation of its youth.  Nearly 5 years into the Syrian war, some 4 million Syrian and host community children and youth aged 5-17 years are in need of education assistance, including 2.1 million out-of-school children inside Syria and 700,000 Syrian children in Turkey, Lebanon, Jordan, Iraq and Egypt. But with no political solution in sight to one of the most brutal conflicts the world has seen in decades, the number of children missing out on an education continues to climb. It is no co-incidence that the countries with the highest numbers of child labourers-Afghanistan, Nigeria and Pakistan that have been affected by longstanding conflict and emergency situations-are also the countries with the highest out of school populations.

Comparative analysis between war‐affected and non‐war‐affected regions done by ILO reveals that child economic activity is higher in the war‐affected regions than in the regions that enjoyed relative security. A recent analysis further emphasises that adolescents, specifically girls, are the age group that is most frequently missed by international assistance. Therefore it is not an understatement to say that without targeted national and international efforts, children and adolescents will continue to face barriers and miss out on education, miss out on social protection and remain at risk of being abused, injured and face death, during conflicts and emergencies.

It cannot be false to say that these problems are intensified by the absence of a strong and effective child protection system, including the lack of policies backed by adequate resources, capacity and measures to improve child protection in emergencies.

It is important to note that true prevalence of child labour is always higher than what is reported. Because child labour is illegal in many countries, refugee families and employers in the host countries often hide the practice for fear of legal consequences. It is often difficult to track the occurrence of child labour in such situations as many children are engaged in irregular, short-term jobs that change daily and in unpaid work. Also because of the frequent movement of the refugees, children engaged in work go unnoticed.

Nearly a year ago the world witnessed another grave emergency in Nepal as two earthquakes killed an estimated 8,500 people and injured another 20,000 in Nepal. An estimated 12,000 Nepalese children are trafficked every year, but since the two catastrophic earthquakes, the threat of  child rights abuses with many reported cases of trafficking, child marriage, child labour and violence against children is said to be even higher.

According to a recent report from the European Union’s intelligence agency, nearly 10,000 refugee children have gone missing- many being feared to have fallen in the hands of organised trafficked syndicates.

Education is a proven strategy to reduce and eliminate child labour and violence against children in crisis situations. Education is a necessary tool to break the cycle of poverty faced by displaced children. However, despite several emergency situations that the world has seen, the financing for education along with financing for children specifically remains low, leaving millions of children without any hope for their future.

The Secretary-General’s Report on World Humanitarian Summit, that is going to be held in Mat in Istanbul, turkey this year,  brings some optimism, as he focuses on the fact that now every country should have inclusive national developmental strategies, laws, economic and social policies and safety nets to protect and respect all vulnerable people including children.

The adoption of the Sustainable Development Goals in September 2015, wherein world leaders committed to ensuring inclusive and quality education, eliminating forced labour, modern slavery, human trafficking and ending all forms of violence against children represented in Goal 4, 8.7 and 16.2, provides the impetus to this bold ambition. It is now a legal and moral responsibility of the heads of states, global leaders in business, NGOs and people affected by crises to create a more humane world and ensure no one is left behind and those furthest behind are reached first.

Global March Against Child Labour works to advocate for rights of vulnerable children engulfed in the cruelties of war, disasters and emergencies. We believe that every child has a right to a safe environment and a happy childhood- free of abuses and exploitation.

Therefore in our engagements with partners, world leaders, NGOs, Governments and people like you, we stress on the fact that humanitarian response mechanisms that the world currently is used to, during the times of emergencies, needs reform and greater inclusion of child protection measures and targeted programmes to eliminate child labour, child slavery and child trafficking.

While you and your child may feel secure right now, there are millions of children who feel the opposite due to the harsh circumstances they are facing. You and we together can make a difference to the lives of such children, by only raising our voices and concerns about them. Join our efforts to talk more and more about greater inclusion of child labour in humanitarian assistance efforts and need for proper child protection measures for prevention of worst forms of child labour in the fragile states and the countries hosting refugees.

You can join our movement by copy pasting the following line in your Facebook/Twitter Feed and tag us and World Humanitarian Summit in the same.

Every voice raised for the rights of children is a movement in itself. By speaking more and more about children’s rights we can ensure that the concerned authorities are listening and we cannot do this without you.