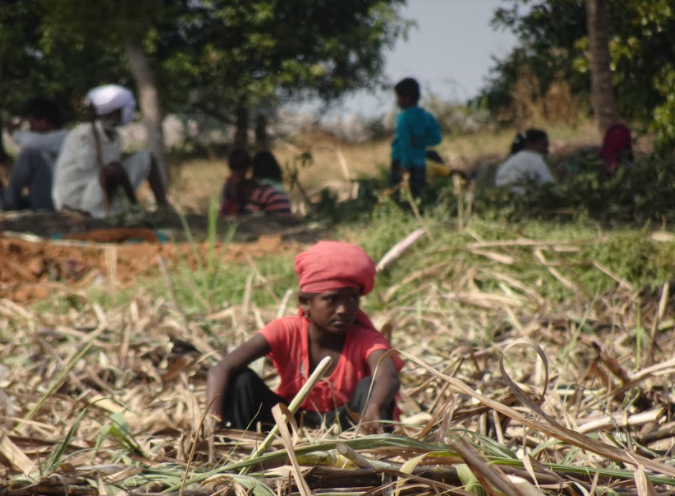 In August 2020, Global March Against Child Labour released an evidence-based report, providing an overview of the situation of child labour with a gender lens in sugarcane harvesting in India. The report highlights that children are pushed into hazardous child labour due to structural poverty among harvesters, most of whom are from Scheduled Castes, Scheduled Tribes and Other Backward Classes, also referred to as DBA (Dalit, Bahujan, Adivasi/Tribal) in this article, because of exploitative hiring practices resulting in debt bondage. It was found that traditional gender-based norms contributed significantly to child labour by normalising unequal wages and unpaid family work.

This article by Gazal Malik and Kratika Choubey* is an extension to the report, focusing on the facets of gender and caste as cross-cutting issues to be kept in mind while addressing the problem of child labour in sugarcane supply chain and in other agricultural crops in India.

Maheswari and Kavita who migrated from Bellary to Mandya district of Karnataka, also known as the “Sugarcane City”, had just returned from a sugarcane farm located 2 kilometers away. Their work was not finished yet. The sisters had come back to the padav (temporary accommodation for migrant workers engaged in sugarcane harvesting) to fetch water for the next morning before it was too dark for them to walk alone to the nearest hand pump. “Will you wait for us to come back or do you want to walk with us towards the handpump?” asked Kavita, looking at Maheshwari and suddenly bursting into laughter. As we walked with them towards the handpump, Maheshwari shared that afternoon is the only time when they can get some water from the handpump because in mornings and evenings the locals don’t let them fill water from the community handpump and hurl casteist remarks at them. “Two of the upper caste men also tried to grope us last week.” said Maheswari while signaling us to walk faster”.

While Maheswari dropped out of school after 5th grade, Kavita was never enrolled in any educational institute. Both of them started working on the sugarcane farm as soon as they learnt to use a koyta (a sickle used to cut cane, also a term used to refer to migrant sugarcane workers). They would soon be married at the age of 15 and 17 respectively, into a family of migrant sugarcane harvesters. When asked why they are getting married early, they reluctantly shared that their parents have to worry about their safety all the time so they will be “given” to a suitable boy and their parents can work peacefully. “I asked my parents to wait for some more time,” Kavita said, “But they told me this is the right age and I am not the only girl getting married at this age”.

After Maheswari and Kavita are married, they will have to continue working on the sugarcane fields with their new family. As has been the experience of many other female sugarcane harvesters that we interacted with, both of these girls will end up working for an average of 16-18 hours a day, in addition to the unpaid labour at home. They are also likely to cut cane till the very last day of their pregnancy, without receiving any maternity benefits such as paid leaves or extra rest time. Statistically speaking, there’s an 80% chance that their children will never access school education and end up in the labour market.

Child marriage is illegal, yet it is prevalent in regions where farming incomes are low and migration for harvesting sugarcane has been a norm. For instance, in the Dang region of Gujarat, a predominantly tribal area, 33% of the total marriages in 2019 were child marriages, as reported by the rural municipality. Hardships caused by multidimensional poverty and the fear of sexual abuse of young girls are reported as the principal drivers of child marriage in the region. As a consequence of COVID-19, the practice of child marriage is becoming more and more common amongst migrant families because of the increasing debt and decreasing household income. Thus, for children belonging to families made desperate by caste based structural poverty the choices are not many but to engage in child labour, give in to child marriage as a means of survival and avoid being victims of sexual exploitation.

Often gripped by the notion of poverty, the discourses on child labour pay limited attention to the crucial point that child labour is a gendered and caste based experience. As a result of adherence to traditional gender roles, many young girls, especially from the marginalised castes suffer the triple burden of housework, schoolwork (or denial of education in most cases) and work outside the home, paid or unpaid. With innumerable obstacles to get decent education and livelihood opportunities because of being born into a certain caste, the gender and caste based injustice and lack of access and control over resources only passes on from one generation to another.

The fact, that women and children remain the most vulnerable and are used as disposable resources for generating maximum profits, speaks volumes about the interconnectedness of gender norms and child labour amongst the marginalised castes. For instance, in April 2019, an Indian newspaper reported that women, most of them Dalit and Adivasi, in Maharashtra’s Beed region underwent mass hysterectomies because many contractors were unwilling to hire menstruating women as it impacts the strict deadlines and production targets when female labourers need to take time off. Similarly, in 2016, Reuters reported that sexual abuse of women cane cutters by supervisors, contractors and landowners was also rampant in western Maharashtra and to avoid unwanted pregnancies, women labourers were ‘encouraged’ to get hysterectomies by family members and employers.

Moving forward with a Rights-based Approach

Women and children from the Dalit, Bahujan and Adivasi (DBA) communities suffer from “structural discrimination”, meaning that they suffer discrimination and exploitation on multiple grounds and especially in largely informal sectors such as agriculture. The approach to address this type of discrimination needs to be comprehensive and rights-based. Acknowledging women’s contribution as farmers and labourers and ensuring their rights and entitlements, is one of the first key steps towards addressing child labour in agriculture. Women reinvest most of their earnings back into their households and when they are not paid enough, it is also their children who suffer.

Both the government and the business community have a responsibility towards this and doing just the usual “due diligence” is not enough. Businesses that buy sugarcane and other products from countries like India have to keep in mind the historical forms of oppression such as caste and gender that can contribute to child labour and other forms of modern enslavement like situations in their supply chains. Besides being cautious of a country’s context, businesses also need to take into account the need for additional measures in their actions and decisions to prevent further worsening of structural inequalities and discriminatory social norms. Simply put, businesses must go beyond the minimum standards of respecting human rights at all stages.

In India, COVID-19 has reversed years of gain in the war on poverty and hunger — over 50% households in rural India have cut down on the number of meals, according to a recent study. Extreme poverty destroys a person’s ability to negotiate in the labour market, leading to lower wages, longer hours and unpaid subsistence labour from family members, including children. This is the reality of the post-COVID world and an opportunity for businesses to demonstrate their commitment towards ending human rights violations in their supply chains.

Detailed recommendations for the government, the private sector and the civil society are provided in Global March Against Child Labour’s report “Paradox of the Sweetest Crop”.