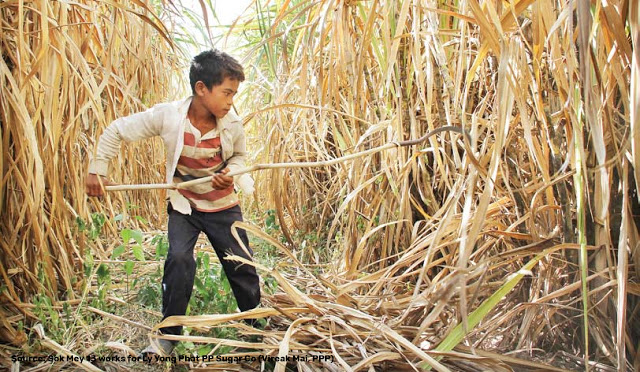 Child labour has been a prolonged issue for the better part of this century, especially in the field of agriculture, where unlike the service industry there is a lack of effective rules and regulations to guard against children being employed in farms and fields. While the number of child labourers employed in the service industry have reduced considerably over the past decade, the same is not the case for the agricultural industry where unlike the service industry where childen are more often compelled to engage in child labour by their parents and circumstances, in the agricultural sector, the employment tends to be within the family and more voluntary than compelling, though in many African nations this may not be the case as financial upliftment is the driving motive of engaging children in plantations.

Sugar plantations are perhaps the most prominent examples where children are engaged as labourers, especially in the African continent and Latin America, where in countries like Kenya and Uganda in Africa, and Colombia, Mexico and Bolivia in Latin America, a majority of child laborers are employed in sugar plantations, often employed in the harvesting process of sugar. The harvesting process, which is mostly manual in these areas, involves chopping thick stalks of cane with a blade, often for more than eight hours per day throughout the harvest season which causes injuries such as cut fingers or legs caused by the usage of machetes and sickles. Spraying pesticides and herbicides exposes children to dangerous chemicals, which can lead to respiratory illness and skin and eye irritation, with long term impacts such as increased risk of cancer and neurological damage. While these tasks are generally assigned to adolescent children, the younger children are engaged in lesser physically demanding jobs such as planting and weeding. The cost of subjecting themselves to such hazardous work for these children is not enough, many a times being less than the government standard for daily wages, which makes the purpose of engaging in child labour seem rather unfruitful.

What is very apparent to us but perhaps not to the people employing these often a time helpless children, is that these children should not be labouring in fields and plantations and instead should be acquiring their much needed primary education, securing a stable future for themselves. However, due to unfortunate circumstances and sometimes ignorant parents fighting abject poverty, these children are left with no option, sacrificing their much needed education in the process. Taking the producer’s or farmer’s perspective under consideration, the reason for employing these children may be for the sake of cutting costs or an inability to automate the production process due to a poor financial condition of the producer. But the producer’s benefit cannot supersede a child’s necessary education which he or she is being deprived of.

Not only in Africa and Latin America, children are also employed in sugar plantations in India, especially in the state of Maharashtra, where the same factors are in play which force children to engage themselves in such hazardous work which is detrimental to their health, as the case is in the African and Latin American nations.

Many poverty alleviation programs and employment generation schemes have been implemented to protect the interests of these children and their poor families but there effectiveness in doing so raises question marks. Those in charge of implementing these schemes are carelessly discharging their duties.

A suitable remedy for this can be the government’s cooperation with the various NGOs working towards the same purpose, such as Global March. These NGOs are better equipped to deal with issues concerning child labour, as they have a better understanding of the situation and circumstances which the children are subjected to thus making them better suited to develop successful schemes. In this regard, global march has undertaken a great deal of research and analysis of the working conditions in which children are employed and the nature of work they are involved in. This has enabled us to develop viable action plans for the betterment of these children and protecting their rights. With the cooperation of the government, child labour as a problem can be suppressed and eradicated to a great extent. Especially in a country like India, where the agriculture sector is a major component of the economy, the introduction and implementation of proper rules and regulations to ensure that child labour is reduced is the need of the hour. Our children are the country’s future workforce and providing them with education is vital.

For you as a reader, it is very important that you spread as much as awareness as possible about the pressing issue of child labour. We have to put ourselves in the shoes of these children and view things from their perspective in order to realize the graveness of this issue. We have to take steps to the best of our capacity to ensure that children engaged in child labour are given the access to proper education and their future is protected and secured to the greatest extent.