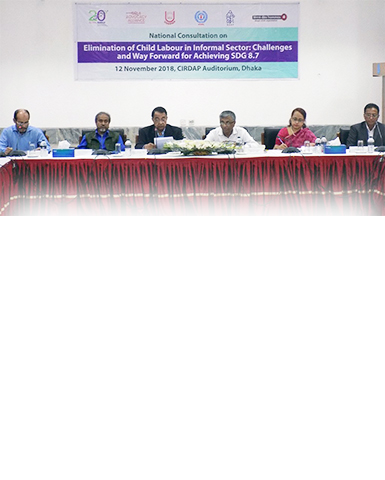 In order for Bangladesh to achieve its development goals, the country needs to eliminate child labour and make sure they are developed into skilled labour, experts said on Monday.

They were speaking at a discussion called “Elimination of Child Labour in Informal Sector: Challenges and Way Forward for Achieving SDG 8.7,” organized by Bangladesh Shishu Adhikar Forum (BSAF) at the CIRDAP Auditorium.

BSAF Chairperson Dr Khawja Shamsul Huda said even though Bangladesh is currently benefiting from a demographic dividend that will continue till 2030, it will start to have an aging population after 12 years and this is when the effects of having an unskilled labour force will begin to be revealed.

He warned: “If we cannot stop children who are about to drop out from entering secondary school, then we are going to have a huge skilled labour crisis in 12 years.”

Shamsul Huda also said that 43% of educated people remain unemployed, and the employment market has to be restructured to make sure there are enough jobs.

National Human Rights Commission (NHRC) Chairman Kazi Reazul Haque said the target might not be reached by 2025, but if proper initiatives are taken now then Bangladesh can be closer to the target.

In his presentation, labour and youth employment expert Tim Nurunnabi Khan said the inclusion of families in social safety net programs is needed for the proper elimination of child labour.

She said in the recently approved Child Labour Act (Amendment) 2018, child labour has been banned entirely.

“The ministry has started mapping the informal sector and the initiative is to make a list of the subcontract base factories in Dhaka South City Corporation (DSCC), where every factory has a registration number. This database will help make it easier for the ministry to monitor the factories,” she said.

The additional secretary said the Executive Committee of the National Economic Council (Ecnec) recently approved a project where some 100,000 street and poverty stricken children would be rehabilitated into mainstream society and will not have to work.

“The project is designed in a way to ensure these children do not have to join the labour force,” she added.

Inspector General of Department of Inspection for Factories and Establishments (DIFE) Additional Secretary Shamsuzzaman Bhuiyan and Country Director of Terre des Hommes Netherlands Mahmudul Kabir were also present at the program, among others.