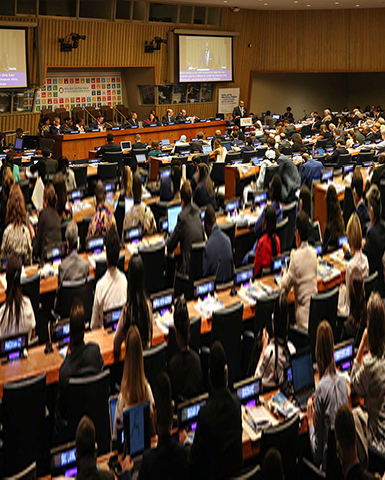 “When it is obvious that the goals cannot be reached, don’t adjust the goals, adjust the action steps.” – Confucius

This quote by the great Chinese philosopher summarises the key message of the High Level Political Forum on Sustainable Development (HLPF) that ended last week at the UN in New York. The HLPF which is the central platform for follow-up and review of all 17 SDGs clearly showed that we as a world are not on track to achieve the Sustainable Development Goals (SDGs) and we must step up and adjust our efforts. Delegates during the Forum noted that even though some poverty was reduced, still far too many people remained in extreme poverty, inequality was high and increasing, women and children continued to be marginalised and a number of threats undermined the progress in achieving the SDGs.

An assessment of this year’s theme, “Empowering people and ensuring inclusiveness and equality”  also fell short of coming even closer to this goal as it was reported that many were not just left behind but also pushed back further, especially amongst the marginalised groups, including children and women.  This was further evident in the reviews made for the six SDGs.  The SDG 4 on quality education was said to be fighting “global learning crises” and that progress on SDG 8 on economic growth and decent work that also underlies the target of ending child labour by 2025, was “slow and uneven”.  Even though the Forum repeated the interconnectedness of these two goals and that without quality education and sustained and inclusive economic growth, ending child labour cannot be achieved; the Voluntary National Reviews (VNRs) submitted by the member countries highlighted a different and bleak case.

Though many countries reported progress on SDG 4 in their VNRs, sadly there was hardly or no mention of progress made to eradicate child labour, except instances such as Ghana describing child labour data and their strategic plan to tackle it, Cote D’Ivoire mentioning that it has taken steps to combat it, Indonesia stating the percentage of children in child labour, and Pakistan alluding to undertaking surveys to assess the magnitude of child labour.  All constitute rare examples that still do not compensate for the utter lack of importance given to this issue by most governments all across the globe.

Further, the ‘Four Years of VNRs: What have we learned on implementing the SDGs?’ event at HLPF held on 15 July 2019, (where Global March represented the Major Group of CSOs), highlighted that while VNRs was recognised as a good reference point for stakeholders to map progress on SDGs and view an overall picture; many countries still faced challenges in ensuring participation of CSOs, Members of Parliament, Private Sector, Young People and other stakeholders; making VNRs reports incomplete and missing diverse perspectives. Global March also participated at the event organise by Alliance 8.7 titled Accelerating Action to End Forced Labour, Human Trafficking, Modern Slavery and Child Labour on 17July, where Global Digital Report on Pathfinder Countries was launched and selected Pathfinder Countries shared their experiences and challenges in the process and identified ways forward in terms of policies, partnerships and coordinated actions at all levels. During this meeting Argentina proposed for declaring 2021 as the International Year of Elimination of Child Labour.

Apart from this, gender, which holds a central position in the achievement of SDGs, found its place during discussions and presentations at the HLPF. Young people were no longer side-lined and had their say during the proceedings. While the HLPF had progressed in these two areas, only their ‘inclusion’ is not enough. Mainstreaming gender and keeping children at the centre of all interventions must be at the heart of all national and international development plans of UN member states and other stakeholders.

While many world leaders are increasingly recognising the urgency of addressing the learning crises and accelerating the pace to ending child labour, one of the top line messages emerging from the Secretary-General’s SDG progress report is the resource constraint faced by countries in achieving SDGs. With the current investments made in education and ending child labour, it will take 100 years to achieve inclusive and quality education for all and 121 million children will still remain in child labour by 2025.

When the world can spend trillions in strengthening their defence systems and multinational corporations can continue making massive profits, adequately funding education for children and aligning them with child labour elimination programme is also possible.  Governments must not only rely on bilateral assistance but must also focus on domestic resource mobilisation and linking development spending with SDGs. Businesses must move beyond corporate social responsibility and adopt sustainable and human rights based approaches in their day to day operations( going deeper down their value chains), and assist the governments and civil society to ensure all children have access to quality schooling and no child labour is found in any product supply chain.

The VNRs (that saw an increase in submissions this year) to some extent showed positive signs of tracking progress, forging multi-stakeholder participation and strengthening implementation. However they were not substantive enough and lacked reporting on data. Further non-submission of VNRs by most member states even after four years of the adoption of the 2030 Agenda demonstrates the illusive effectiveness of this reporting mechanism.  To ensure absolute accountability of nations, VNRs must become compulsory and make space for civil society to submit shadow reports to maintain checks and balances.

Lastly to achieve the SDGs, especially SDG Target 8.7, civil society participation cannot be underestimated or sidelined. With shrinking civil society space across the world and with only “tokenism” engagement of civil society, the world is likely to generate unequal and exclusionary development policies and practices, robust data and research will not be produced, exploitation of children and suppression of labour rights will continue, empowerment of women and girls will be hampered, and vulnerable groups will be left behind. Further, the wave of authoritarian, right-wing governments around the world are threatening progress on child labour as these regimes attack rights-based discourses and organisations as a matter of their basic governing ideology.  These regimes foster a variety of anti-people policies which are setting back the cause of elimination of child labour. Therefore to ensure welfare of all, governments, businesses and donors need to work hand in hand with civil society and must give adequate space to civil society’s activists to thrive and contribute to the achievement of SDGs.

Concluding, the upcoming SDG Summit this September, under the auspices of the UN General Assembly, should call for adjustment and enhancement of efforts and political will by world leaders. World leaders must focus their attention on the hard to reach children and recognise that ending child labour is not just one of the 17 goals, but has an cornerstone impact on most other goals. Nations must seize the opportunity in September to do what it takes to create a child friendly and child labour free world.