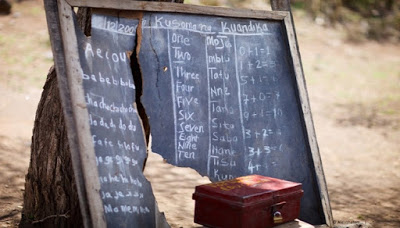 Education is not just a fundamental human right, but also an enabling right – essential for the exercise of individuals and communities at different levels. It plays a significant role in supporting survival, growth, development and well-being of nations and its children. Enhanced investment in education also contributes to higher income, individual empowerment and decreased poverty levels of the countries, especially the ones ridden with conflict. The on-going humanitarian crisis shows that there is no time more important for education than the time of war as the conflict and violence become significant barriers to the goal of providing a primary school place for all children.

As the economic circumstances of families in the developing countries, especially in the conflict areas become more desperate, the conditions in which children find themselves are worsening. There is no shortage of evidence that the crisis is pulling children out of school and pushing an ever-increasing number towards exploitation in the labour market. For instance some 2.7 million Syrian children are currently out of school, a figure swollen by children who are forced to work instead. Many became pregnant, married as children or are pushed into child labour. Many will never return to the classrooms. Many still do not have a chance. The limited access these children have to quality education is part of the problem; moreover, children who work are more likely to drop out of education. According to the United Nations Children’s Fund (UNICEF), children in conflict affected countries are more than twice as likely, and adolescents two-thirds more likely, to be out of school than in non-conflict affected countries.

Children at the risk of being out of school are also the most vulnerable to working in hazardous conditions such as in global supply chains, domestic labour, armed conflict, sexual exploitation, and illicit activities like organised begging and child trafficking. Warfare and conflict has taken away from millions of children their homes, families, friends and education. The total number of children between the age of 6-15 years who are out of school, as estimated by United Nations Children’s Fund (UNICEF), is more than 25 million across 22 conflict and warfare ridden countries. Right now, in countries such as South Sudan, Syria, Yemen and many more, schools and hospitals are under attack. For example, in Syria to date, an estimated 5,000 schools have been fully destroyed and close to a thousand more have been damaged since the beginning of the conflict. Over 60 per cent of refugee children from Syria do not have access to primary education. In Yemen, over 500 schools have already been damaged or destroyed during aerial bombardments or ground offensives. The UNICEF reports that a third of Yemen’s children have been out of school since air strikes began in March 2015. Elsewhere, thousands of schools have closed their doors because of insecurity, interrupting the education of millions of boys and girls.

Education offers hope and is a proven strategy to reduce and eliminate child labour and poverty. Millions of children who are out of school and are pushed towards economic and sexual exploitation are much more than victims of circumstances. Their conditions are a key challenge to building peaceful and strong societies envisioned by the new set of Sustainable Development Goals (SDGs) that affirm every child’s right to quality education, to leave no one behind and to “endeavour to reach the furthest behind”. The SDGs also remind us that “there can be no sustainable development without peace and no peace without sustainable development”.  Yet, conflict too often means the end of learning and development of the affected children. For instance children recruited and used as child soldiers or the ones whose education was interrupted for so long that going back to a regular school might be difficult or impossible as they may have a hard time finding their place in society once their ordeal is over.

If we do not promote their repatriation, and help them find ways to contribute to their communities and their own development through education and vocational training opportunities, these boys and girls may grow up to contribute to the stalling or, worse, the reversal of development. The new agenda therefore is not only to provide quality and inclusive education to every child but also to transform a world confronted with challenges on a scale not experienced in decades. As the Nobel Peace Prize Laureate and Honorary President of Global March Against Child Labour, Mr. Kailash Satyarthi puts it “A childhood without education isn’t a childhood at all, and every youth who is out of school is one too many.” The SDGs, especially with specific goals and targets on ensuring education (SDG 4) are poised to make a real difference in the lives of the childhood of millions of such children and young people affected by warfare and conflict who constitute a large proportion of the world’s out-of school population. It is the need of the hour to commit to developing more inclusive, responsive and resilient education systems to meet the needs of children, youth and adults in these contexts, including internally displaced persons and refugees.

One of the core reasons conflict is taking such a heavy toll on education is  inadequate financing. In 2014, education received only 2 per cent of the humanitarian aid as many global appeals do not cover all those in need. What is needed most now is for donor countries to honour with sense of urgency and responsibility the globally agreed target of allocating at least 4% of humanitarian aid to education.

According to the UNICEF, at present conflict-affected countries, in particular, are spending around 3% of national income – below the global average of 4% and the recommended target of nearly 6%. With so many of the world’s out-of-school children and adolescents living in conflict-affected countries, investing in education should be a priority for external donors when governments fail to do so, but most countries in protracted crises do not receive enough humanitarian financing. The developing countries and the ones affected by conflict should commit to allocating at least 20% of their national budgets to education and remove all financial barriers that prevent the most marginalised children from accessing school. In defining national education budgets, countries should consider the lost opportunities of not investing enough in education and the impact this has on poverty, unemployment and marginalisation.

Recognising the potential and power of education, Global March Against Child Labour has been advocating for realisation of the fundamental right to good quality education of all children by governments, as custodians of this right.  As an organisation, it has also impressed upon the need to ensure that education policies and programmes, include and target those who are hardest-to-reach and likely to remain out of school such as those in child labour, affected by trafficking, conflicts, disasters and other vulnerabilities. In the current times, where this right to education is in jeopardy for millions of children, Global March Against Child Labour especially calls on governments to develop clear roadmaps to implement SDG 4 on education and to commit resources to education to invest in the future of countries and the world at large.  It also calls on to donor governments to commit more resources for humanitarian aid to education for children affected by conflict.

You can also join hands with us and do your bit right now by supporting our work in this #GlobalActionWeekForEducation and can pledge to support education for all and advocate with your governments that its #TimeToDeliver and #StandUpForEducation.