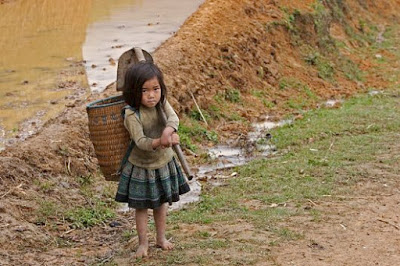 “She is barefoot, covered in dirt and sweat. She can be seen pulling weeds from rows of sugarcane; a work reserved for adults, not children. She can only wear a cap to protect her from the scorching sunlight, rain or storm and goes back home after a working day of as long as 7 hours. She says she does it to help her parents. She also helps with the household chores, has never seen a classroom and never played with other children in the playground. This is not just one girl, but one of millions who are part of an informal, and sometimes illegal economic system of child labor.”

The agricultural workforce remains one of the largest workforce sectors in the world and is being increasingly feminised with self-employed women farmers, waged agriculture women workers and sadly, with the participation of littlegirl child labourers as well. Today, 64 million girls in this world work as child labourers, 71% of them are in the agriculture sector, which is also considered one of the most hazardous sectors to work in (ILO, 2017). Yet, evidence of specific research focused on girls in child labour in the agricultural sector does not do justice to these numbers as it remains scant, under-reported and homogenous, making a challenge to provide equal rights and opportunities to both girls and boys.Gender is a central factor around which work and production are organised and divided- in not just domestic spheres, but also in the global and local supply chains of industries, services and agriculture and the various related processes. Millions of girls who work on sugarcane, cocoa, tea or palm oil farms also have additional burden of looking after domestic chores and arevulnerable to violence at work and at home. Gendered roles and norms also prevent girls from getting education, more so when they work- often being unpaid or underpaid as compared to boys, thus making themthe largest invisible workforce such as in the case of agriculture.

In the year 2006, ILO confirmed the number of child labourers in the agricultural sector as nearly ten times higher than the number of child labourers in other sectors (e.g. in manufacturing, mining, etc.) (ILO, 2006). In 2017, the reality has not changed much, with agriculture still constituting 70.9% of child labour in comparison with the service sector (17.2%) and industries (11.9%). Even though the discourse on ‘child labour in agriculture’ has gained momentum globally and regionally by significant stakeholders in the past few years, millions of girls in this sector are still trapped in this worst form of child labour and challenge to protect them from the harzards still lingers, as girlshave been historically more vulnerable to being abused, trafficked and devoid of education.

Apart from the fact that working in the agricultural sector is one of the most hazardous places for children, in particular for girls, another crucial concern is that the complex supply chain of the sector has worsened the situation of child and forced labour. Large agricultural buyers and processing firms often source from small producers further up the supply chain and do not have adequate transparency about their workforce which could be young working girls, forced children, trafficked women or helpless refugees.

The agricultural produce and its supply needs intensive labour requirements as a part of the demands in the global supply chains, which means more cheap labour, hazardous and unregulated work conditions and more child labour. In a 2016 study by Amnesty International ‘Palm Oil: Global Brands Profiting from Child and Forced Labour’ it has been reflected that themost popular food and household companies are selling food, cosmetics and other everyday staples containing palm oil tainted by shocking human rights abuses in Indonesia, with girls as young as eight working in hazardous conditions, hard physical work, sometimes dropping out of school to help their parents on the plantation. Palm oil plantation includes sowing seeds, transplanting seedlings, harvesting, and transporting fruit bunches. Young girls primarily collect loose fruit, help carry and load bunches of oil palm fruit, and weed the oil palm fields. Girls and women are also responsible for gathering and moving the fruit bunches which puts a lot of physical burden on them and negatively impacts their health in the longer run.

Conditions are worse for regions like Sub-Saharan Africa where most child labour is found in the informal subsistence sector, and in exported goods catering to both domestic and global supply chains. Much of the cocoa produced in the fields here ends up in coffee shops, kitchen tables and store shelves across the world. Many other agricultural products such as sugar, tea, palm oil etc. are produced by millions of boys and girls and consumed by people alienated from their situation and the product they are buying. Another example is the tea plantation industry where there has been a history of employing young girls and boys since tea estates were planted in countries like Sri Lanka and India back in the 1930s.  Many tea estates in India, Assam, have also been vulnerable to trafficking of young girls and missing children.

There is nothing sustainable about sectors like agriculture if commodities are produced using child labour and forced labour. The abuses often discovered within sectors that employ children the most are not isolated incidents but are systemic and a predictable result of the way the businesses approach sustainability and maintain transparency about who works for them. It is high time that the players in the global as well as domestic supply chains invest in girls and young women for a formidable ripple effect to achieve SDG goals, in particular goal 4, 5, and 8.7 and create a better world by 2030. The 64 million girls in child labour have limitless individual potential, however they are disappearing from public awareness and the international development agenda. Between inequities in primary and secondary education to protection issues, millions of girls are uniquely impacted when they should instead benefit from targeted investments and programmes that address their distinct needs.

Even though the progress in eliminating child labour is slow, Global March believes that there is still hope as long as governments, businesses, CSOs and individuals, all make accelerated efforts to bring justice to the millions of boys and girls trapped in child labour, and create a fertile ground for them to access quality, inclusive and equitable education, with special provisions made for girls.  The SDGs stress on the role of all stakeholders. Thus if SDG 8.7 is to be achieved, we must make efforts now.

On the International Day of the Girl Child, Global March is committed to placing children and girls at the center of our work and positively contribute in eliminating all forms of violence against children. In this endeavour, we are empowering both girls and boys and multi-stakeholders to do their bit.

Join us to bring smiles on the lost childhoods of girl child labourers and bring them closer to realizing their rights, today, tomorrow and in the future.