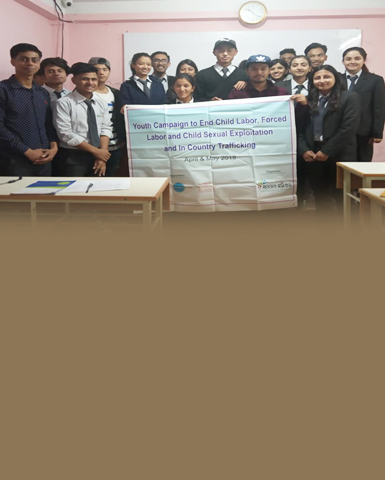 Global March Against Child Labour’s (Global March) implementing partner in Nepal, Swatantrata Abhiyan (SAN), is working towards mobilizing the youth to vigorously participate in advocating the eradication of child labour, forced labour and human trafficking. On 13th May 2019, SAN organised a ‘Youth campaign to end Child Labour, Forced Labour and Child Sexual Exploitation and in Country Trafficking’ in Triton International College, which observed active involvement and participation of 29 students from Bachelors of Social Work, 2nd year. The long term objective of the campaign is to educate and equip these young advocates on critical issues of child labour, forced labour, child sexual exploitation, trafficking and promote multi-pronged youth-led, community based advocacy movement to stomp out child labour, forced labour, sexual exploitation and human trafficking.