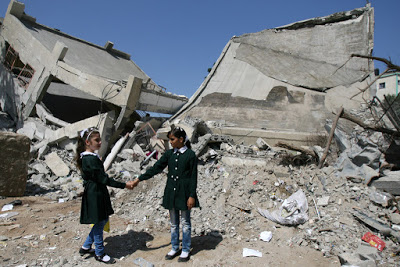 Around the world 535 million children are living in countries affected by conflicts and disasters. One out of every four children is a victim of conflicts and displacement crises in countries already struggling with poverty, malnutrition, armed conflict and the impacts of natural disasters. Lake Chad Basin, South Sudan, the Syrian Arab Republic, and Yemen are some of the regions with the worst humanitarian crises threatening the lives and futures of more children today than perhaps any other time in history. Millions of these children are vulnerable, living in poverty, deprived of adequate nutrition, out of school and at risk of exploitation. The International Labour Organization (ILO) estimates that majority of the 168 million children in child labour live in areas affected by conflict and disaster. The ILO has therefore decided to dedicate the 2017  World Day Against Child Labour on 12th of June on the ‘impact of conflicts and disasters on child labour globally’.

Conflicts and disasters around the world are not just a threat to the children but also their societies, potentially reversing hard-won development gains. Failure to meet basic needs in health, education, and other essential services undermines the ability of communities to prevent, manage, and recover from a disaster. Ironically, the countries with the lowest income often pay the heaviest price. On average, conflicts in low-income countries last about 12 years and displacement due to conflict or protracted crises lasts an average of 17 years (The Overseas Development Institute) which makes the challenge of breaking the cycle of poverty, child labour and lack of education more complex.

As the economic circumstances of families in the developing countries, especially in the conflict areas become more desperate, the conditions in which children find themselves become worse. Millions of children trapped in the disruption or humanitarian crisis are losing valuable, unrecoverable learning time and a decent childhood with their school years simply slipping by with no chance to learn to read and write but instead toil day and night to support their families. One of the examples is Sudan. The country for a very long time has been in turmoil, and one of the poorest countries in the world. Most of the fledgling nations like Sudan, are in the grip of a humanitarian crisis fuelled by years of chronic underdevelopment, conflict and natural disasters. Only one-third of the population has never attended school in the country, the rest are internally displaced persons – of whom more than half are children younger than 18. Right now, in countries such as South Sudan, Syria, Yemen and many more, schools and hospitals are under attack. For example, in Syria to date, an estimated 5,000 schools have been fully destroyed and close to a thousand more have been damaged since the beginning of the conflict. Over 60 per cent of refugee children from Syria do not have access to primary education. In Yemen, over 500 schools have already been damaged or destroyed during aerial bombardments or ground offensives.

Children at the risk of being out of school are also the most vulnerable to working in hazardous conditions such as in global supply chains, domestic labour, armed conflict, sexual exploitation, and illicit activities like organised begging and child trafficking. Warfare and conflict has taken away from millions of children their homes, families, friends and education. The total number of children between the age of 6-15 years who are out of school, as estimated by United Nations Children’s Fund (UNICEF), is more than 25 million across 22 conflict and warfare ridden countries. The limited access these children have to quality education is part of the problem; moreover, children who work are more likely to drop out of education. The circumstances and its impacts get exacerbated further when such exploitation concerns in emergencies does not fit neat definitions of human rights violations, such as trafficked or sexually exploited children. This adds to the creation of many obstacles in the enforcement of national laws and policies to protect children, in particular refugee children from child labour, recruitment and other protection concerns.

The immediate support that feeds into a broader, longer-term vision to address these concerns is to ensure decent livelihood for the youth and the communities and most importantly education for all children, particularly the victims of trafficking, worst forms of child labour, slavery and the ones hardest to reach. Ensuring education and protection services in emergencies not only builds a child’s sense of safety and normalcy but also gives children the tools to rebuild their lives and communities. Yet, education is among the least financed sectors in humanitarian response. In 2014, education received only 2 per cent of the humanitarian aid as many global appeals do not cover all those in need. What is needed most now is for donor countries to honour with sense of urgency and responsibility the globally agreed target of allocating at least 4% of humanitarian aid to education.

Addressing the impacts of conflict and disaster on children, in particular – worst forms of child labour and out of school children is also a key challenge in building peaceful and strong societies envisioned by the new set of Sustainable Development Goals (SDGs). One of the most crucial targets under SDGs is Target 8.7 which reasserts for ‘effective measures to end forced labour, modern slavery, human trafficking and child labour in all its forms, including the worst forms of child labour’, as well as the SDG Goal 4, on ensuring quality, inclusive and equitable education. The achievement of these goals and targets is imperative more than ever to make a real difference in the lives of millions of such children and young people affected by warfare and conflict who constitute a large proportion of the world’s out-of school population. These goals reminds us of every child’s right to quality education and that “there can be no sustainable development without peace and no peace without sustainable development”.

Recognising how we respond in emergencies lays the foundation for future growth and stability, and how we invest in development helps build resilience against future emergencies. In the wake of humanitarian crisis, increased migration, displacement and trafficking has blurred the significance of national boundaries which calls for the reinforcement of collective and sustainable action. However, this vision will require a radical new approach to address child labour and education failures in emergency situations. Governments, businesses, philanthropies and development organisations must come together, not just to lend financial support but also to provide needed intellect and inspiration to a challenge that can rightly be called this century’s civil rights struggle to protect every child. As the ILO recommends, there should be set priorities, designed strategies and implementation of activities to address and prioritise child labour interventions as a life-saving activity in conflicts and disasters. The understanding of present and future risks for millions of children in the absence of intervention should also be strengthened in order to address the issue as a long-term development challenge.