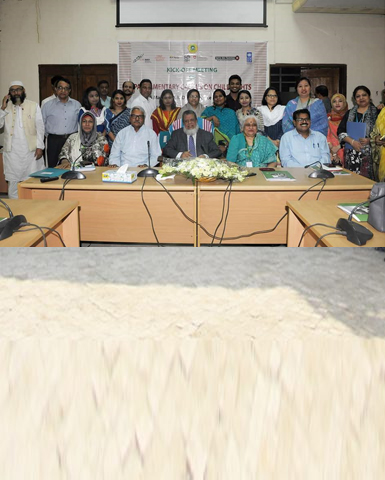 On 15 May 2019, Parliamentary Caucus on Child Rights of Bangladesh was constituted and a kick off meeting was organised at IPD Conference Hall at Sher- E- Bangla, Dhaka. Prior to the kick -off meeting, a small meeting was held at Deputy Speaker’s office where in the Chairperson and Vice-Chairperson were selected and the announcement of the same was made during the Kick off meeting.

The Kick-Off Meeting of the Caucus was attended by 16 MPs, media persons, representatives from Bangladesh Shishu Adhikar Forum (BSAF), Tdh Bangladesh, Uddipan and MJF. The Director of Global March partner, BSAF presented the situation of child rights in Bangladesh and reported an increase in reporting of cases of violence against children. The representative from Global March Against Child Labour (Global March) participated in the meeting, and gave a short presentation on the Parliamentarians Without Borders for Children’s Rights initiative of Global March. The MPs appreciated the constitution of such a forum and discussed on the need for establishing a separate Commission or Department for Children’s Affairs in Bangladesh. The Deputy Speaker, Mr. Fazle Rabbi Miah reiterated that the children’s budget which was approved in 2016 needs to be utilised and that constitution of such a department will ensure spending of the same as well as implementation and monitoring of the laws related to children. The Chairperson of the Caucus, Mr. Md Shamsul Haque Tuku called for effective awareness raising amongst masses in the country on child labour and coordinated efforts by ministries, ngos and other stakeholders. Mr. Isfrafil Alam and Ms. Aroma Datta, Members of Parliament, suggested the inclusion of the business sector in the eradication of child labour and promotion of children’s rights. The caucus will meet regularly and chalk out its strategy for operation in next meetings, supported by Global March partner, BSAF.