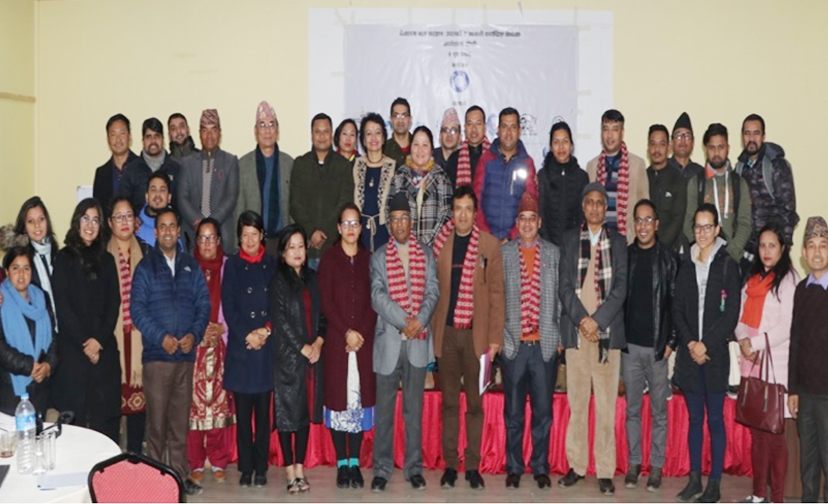 The symposium was chaired by Krishna Chandra Acharya of FOWEP Nepal and the Chairperson of NCPA. Hon. Parbat Gurung, Minister of Women, Children and Senior Citizens was present as the Chief Guest and special guests from NHRC, NCRC, ILO and other CSOs representatives attended the session. The emcee for the symposium was Mr. Tillotam Paudel, Secretary of NCPA.

Ms. Writtu Bhatta Rai, Officer- In- Charge of Swatantrata Abhiyan Nepal highlighted the major objective of the symposium, i.e. to continue the movement of the government and CSOs to implement the newly adopted laws relating to child rights by preparing relevant rules, regulations and policies.

Mr. Tarak Dhital in detail, introduced the most pressing child rights violation issues in our countries such as child marriage, child labour and trafficking, and elaborated the four identified ways to address such issues: 1) Identification of the issue 2) Exploring the cause of the issue 3) Devising first response methods 4) Preparing a long term and sustainable solution. Further, in regards to ways for improvement in reducing child labour, the following steps were explained by him:

Secondly, Mr. Gauri Pradhan gave presentation highlighting the responsibilities of the INGO and CSOs to continue taking preventive along with curative steps against child labour, he emphasized on the need of preventive child protection policy for each institution, schools that work with children and corporations in general. In addition, he highlighted the role of media and young students and professionals in child protection sector and recommended that the government also play an active role in promoting child welfare and implementing the existing laws by preparing their rules, regulations and directives in provincial and local level.

Following the presentation, Hon. Minister Parbat Gurung gave his address by concurring to the presentations made before and made solid commitments to follow through and work his best in regards to making the laws at the provincial and local level. He said that they were indeed imperative for enforcement of all the new laws that were adopted.

After the address from the Chief Guest, a few votes of appreciation and questions from the floor, the symposium came to an end by the concluding speech of the chairperson.