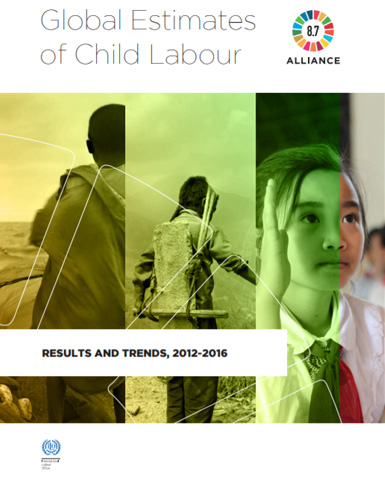 New Delhi: A new report by the International Labour Organization (ILO), Global Estimates of Child Labour: Results and Trends, 2012-2016 released on 19 September 2017 at the United National General Assembly (UNGA), says that a total of 152 million children – 64 million girls and 88 million boys – are in child labour globally, accounting for almost one in ten of all children worldwide. Nearly half of all those in child labour – 73 million children – are in hazardous work, endangering their health, safety, and moral development.

Even though the estimates have shown a continuing trend of reduction (from 215 million in 2008 to 168 million in 2012 to 152 million in 2016), a stark slowdown in the pace of decline has been observed in the last four years, with only a 16 million reduction in absolute numbers compared to 47 million reduction for the previous four year period, threatening the achievement of the ambitious goal of ending child labour by 2025. The decline in hazardous work also slowed in a similar fashion.

Commenting on these new figures, the Chairperson of Global March Against Child Labour (Global March), Mr. Timothy Ryan commented: “It is sometimes said that any progress is good progress, however the new estimates show that between 2012 and 2016 a reduction of only one percent has been accomplished, compared to the 22%  rate of progress  made in between 2008-2012. Though we are moving in the right direction, we cannot carry on with a business-as-usual approach.  We need a quicker, better coordinated and a substantial stepping up efforts at all levels if we are to end child labour in all its forms by 2025.”

These latest ILO estimates published in the lead -up to the Fourth Global Conference on the Sustained Eradication of Child Labour, which takes place in Argentina in November 2017, also shows that the Africa region and the Asia-Pacific region together host 9 out of every 10 children in child labour. Africa ranks highest in number of children in child labour – 72 million, and the Asia-Pacific ranks second highest in number of child labour with 62 million child labourers in absolute terms. The remaining child labour population is divided among the Americas (11 million), Europe and Central Asia (6 million), and the Arab States (1 million).

This clear demarcation of prevalence of child labour thus necessitates a committed effort for a breakthrough in Africa and also a focus on prioritising child labour within humanitarian responses during conflicts and disasters, which have the highest reoccurrences in the African region.

Other main findings of the report:

The report further identifies a number of actions that are necessary to reach the target of eliminating child labour by 2025.  It stresses policy responses to be integrated into broader national development efforts and adapted to local circumstances, and these responses should also address the age, gender and regional dimensions of child labour.

Other actions include continued investment in building the knowledge base on child labour to inform policies and the international cooperation and partnership that is vital for a coordinated response to ending child labour by all stakeholders from all parts of the world.

The upcoming Global Child Labour Conference in Argentina thus holds great expectations for world leaders, businesses, civil society, employer and worker organisations to take the issue seriously and make direct and greater investments in ending child labour in all its forms with particular focus on agriculture in Africa, Asia and the Pacific. These efforts  further need to be complemented and supplemented with coordinated responses to education and poverty alleviation  programmes, giving children – both girls and boys – a chance to benefit from the opportunity to access free, quality, inclusive and equitable education, leading to decent youth employment in the future. Thus it is time that all stakeholders step up their efforts, make concrete pledges and shift their focus back onto eliminating child labour in addition to such other issues as trafficking and slavery. If slavery and trafficking are to be tackled, eradicating child labour with focussed and increased resource allocation is essential as these issues form a complex nexus and have co-dependent relationships with one another.

Moreover if children in the hardest-to-reach categories are to be protected, a stronger resolve to end child labour in all its forms is needed, and faster-than-ever approaches need to be adopted.

Expressing both his cautious optimism and worry on the new estimates, Nobel Peace Laureate and Honorary President of Global March, Kailash Satyarthi, remarked: “It is personally heartening to see a decrease in the number of child labourers in the world, but looking at the pace at which the world is moving forward in the race of eliminating child labour, it is my greatest concern that it will take another 35 years to achieve the SDG Target 8.7. If we don’t strengthen the political will and dedicate enough funds and come up with innovative and bold solutions to end child labour, we will not be even closer to achieving any child-related SDGs.”

As one of the lead agencies driving the anti-child labour movement in the world, the Global March Against Child Labour is committed to achieving this goal by 2025 and will redouble efforts to advocate with the governments and other stakeholders at the upcoming conference and beyond to prioritise ending child labour and invest in it in all its forms, if other SDGs are to be achieved by 2030.