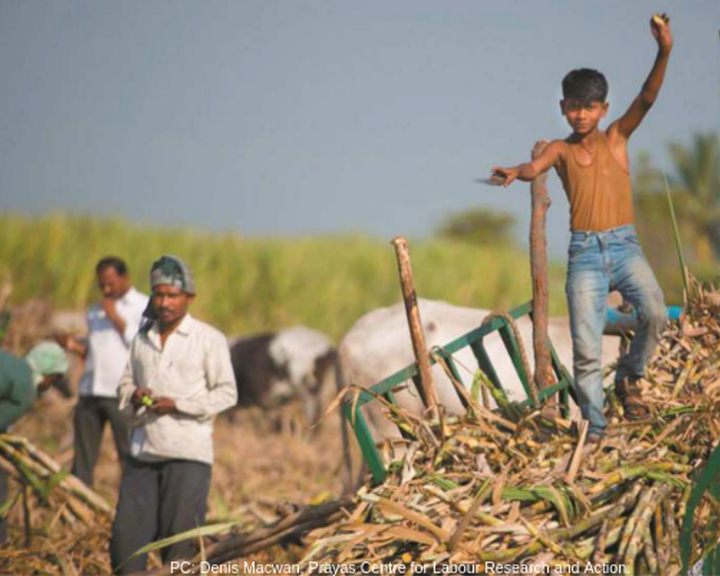 The recorded evidences of slavery in sugarcane date back to 15th century, with armies of slaves being bought together, mostly from Western Africa to work on sugarcane farms on the New World Plantations. Peak of the 19th century saw more than 10 million Africans forcibly migrating to most of the sugarcane cultivation regions in what became to be known as ‘The Trade Triangle’ or slavery in sugarcane. In the 21stcentury, after slavery has legally been abolished, this historical case of sugarcane production still finds relevance in countries where the agrarian economy and the globalised trade of sugarcane have led to modern enslavement practices such as child labour, forced labour and bonded labour.

In India, the second largest producer of sugarcane globally, armies of millions of immensely deprived tribal migrants are bought to sugarcane producing areas every year by paying them an advance at usurious interest to legitimise bondage. Lack of employment opportunities in their native villages, infertile agricultural land, political conflict over land and water, combined with the deeply rooted institute of caste system and gender inequality are some of the crucial factors forcing them to take the debt. Most of the cane cutters remain indebted for generations despite working endlessly at the camp sites (sugarcane cultivating farms) during the harvest. These circumstances force their children to drop out of school or attend classes only when they go back to their native villages, while they toil their time away engaging in unpaid labour, cooking, cleaning and taking care of their siblings during the seasonal harvesting period.

200,000 children migrate with their families in the Indian state of Maharashtra alone to its western regions for working in sugarcane farms, often unaware of their living and working conditions which includes temporary settlements, lack of access to water, sanitary facilities, medical assistance and electricity. During the harvest period, the entire family is engaged in labour where one can easily spot young adolescent boys cutting the cane and children piling it up. The situation is worse for women and young girls who have an additional burden of domestic chores, taking care of children both inside and outside of farms and fetching water from miles away. On an average, these families have to work for 18 to 22 hours a day, as they have to stay awake for the loading and unloading of the cane and often sleep without eating as the women are too tired to cook. Some expecting mothers also work as cane cutters, going into labour on the farm itself, with no medical assistance from anyone except their fellow women cane cutters. Once the child is born, the mother is back to work after a rest period of 7 to 10 days, along with the new born.

Lack of industry specific data and the tangled system of bondage have for years kept the exact number of children working in the sector unknown. However, this scarcity cannot be used to deny that child labour has been and is a significant and suppressed issue in sugarcane production. According to the recent global estimates by the International Labour Organisation, agriculture is the largest employer of child labourers. The United States Department of Labor (USDOL) links sugarcane production, an agrarian product to child labour in 17 countries, some of which also happen to be the largest exporters of sugarcane, including India, Brazil, Thailand and Cambodia to name a few. In fact, the most common tasks performed by children in sugarcane farming are hazardous in nature such as the application of agro-chemicals for crop protection and manual harvesting which is done with the help of sharp tools often leading to injury. Additional risks include exposure to pesticides, insects, snakes and extreme weather conditions. The burning of cane also leads to inhaling of fumes and dust which can cause respiratory diseases and irritation of the skin or eyes as long-term consequences.

While smaller grassroots organisations in some parts of India have been taking steps to educate the children of sugarcane workers by providing them residential schools and also addressing their health as well psycho-social needs, interventions from the state and central government are quite weak. This also reflects the paradox of acceptance of child labour, bonded labour and forced labour and at the same time the denial of these practices. The ones who have steering power over the social order of sugarcane growing zones as well as political economy of sugar production have failed to pay serious attention towards the pathetic working and living conditions and inhuman state of existence of sugarcane harvesters and their children. A key example is the closing down of Shakar Saalas’ or ‘Sugarcane Schools’ under the Right to Education Act in India after its last amendment.

Along with human rights violations such as child and forced labour and debt bondage, the sugarcane crop also has a history and present of land acquisitions and conflict over natural resources with the government as well as the companies at the expense of small scale food producers, marginalised farmers and tribal populations. While the food and beverage companies as well as businesses procuring the by-products of sugarcane do not directly own many resources such as land and water, they are collectively the biggest buyers of products grown in countries plagued by human rights violations and bought by millions. For instance, the ‘Big 10’ collectively generates revenues of over $1.1bn a day that comes from commodities grown and labour procured from countries with a record of labour rights violations where men, women and children put in endless number of hours for labour that does not even pay them close to the minimum wage, or where there labour is counted as a repayment of never ending debt.

On a positive note, there sure have been some collaborative efforts from the buyers’ end to maintain cleaner supply chains and ensure decent work and better standards in sugarcane. Initiatives such as due diligence, risk assessments, supply chain mapping, supporting smallholders, and driving improvements in decent work through supplier codes of conduct and third-party monitoring are some measures increasingly been used by companies. However, it is extremely important for businesses to consider the socio-economic inequalities in regions where their supply chains are connected, which requires transparency and knowledge of the most inaccessible tiers of supply chain, such as the farm level working condition of the marginalised migrant labourers.

The complexities of supply chains can no longer be used to rationalise the existence of practices such as child labour, forced labour, debt bondage and how these structurally have worse consequences for millions of young boys and girls, men and women. This would only be made possible if child labour as an issue is seen with its various intersectionalities along with issues of the communities and social groups that are engaged in the supply chains. The stakeholders benefiting from agricultural crops such as sugarcane must take the accountability of ensuring the rights of the most marginalised workers and their children in the supply chain and be extremely diligent of how these complex social and political realities shape issues of child and forced labour to fulfill the needs of global trade and consumer demands.

To achieve this, it is important to build interventions and practices keeping in consideration the areas below:

***This article is based on field visits to native regions of tribal sugarcane cutters in Gujarat and Maharashtra who migrate for seasonal work in sugarcane farming. The findings are based on their interviews, discussions with their families, middle men/labour contractor, some local stakeholders, grassroots CSOs and trade unions. The visit was made possible with the support of PRAYAS -Center for Labour Research and Action.