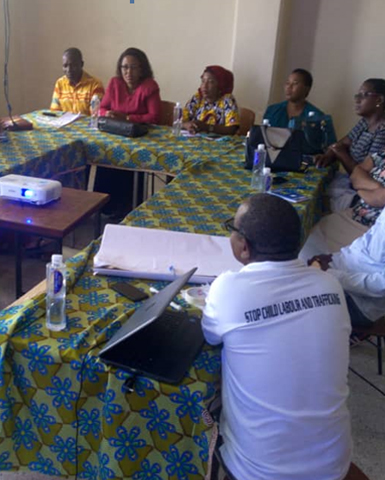 A teachers training was organised by ANPPCAN-Tanzania on child rights for facilitating child rights clubs. The training was done on 13th June, 2019 at Hubert Kairuki Memorial University. This training brought together 8 primary school teachers from 4 schools who were. The teachers were facilitated on awareness of child rights. Various issues about child rights focusing on child labour and human trafficking were discussed such as children having a heavy workload at home and canning children at school and at home that could lead into fake/fear discipline and could hinder children from coming to school regularly, affecting their education performance. The emphasis was made to goal 4 (education for all) and goal 8.7 (which is on elimination of child labour by 2025). They discussed on how to identify child abuse symptoms such as seeing bruises, isolation, sadness, absence from school and measures to take when there is child abuse, or when child abuse is likely to occur. The session involved discussing the matter at school level and find an amicable solution or report the matter to law enforcement agencies if it is serious.

Two laws that have bearing on child labour, child trafficking and education, ie The Law of the Child Act, 2009 and Traffic in Persons Act, 2008 were discussed.

Apart from that they were facilitated on how to establish and run child right clubs in their respective schools. Teachers were also informed about how to facilitate the ambassadors on how they can lead the CRCs in the respective schools. It involved how to effectively conduct various businesses of the clubs such as debates, songs, citations, drama, acrobats and sports in general in relation to child rights- focusing on child labour and child trafficking.

The method used was participaroral where resources such as pictures, role plays, energisers, and buzz groups were utilised. Facilitators were Ms. Rita Minga and Daudi Chanila.