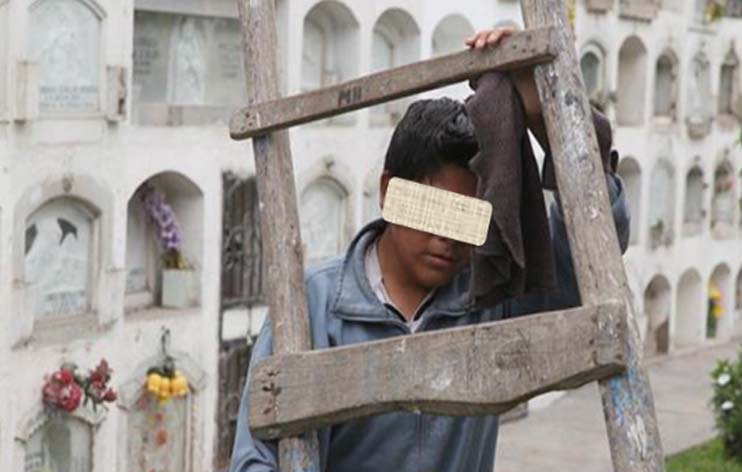 In Peru, as in the rest of Latin America, three months of a pandemic have exposed great pre-existing inequalities, which have long prevented the exercise of human rights of the most vulnerable population. The pandemic has rendered millions of children and adolescents in a situation of social exclusion, poverty and discrimination (especially those who have been working from an early age and in hazardous activities). COVID-19 has further exposed the discrimination of children and adolescents living in rural areas, ones belonging to indigenous communities, and ones with disability and differential gender and sexual identity.

A child working in agriculture in the town of Carapongo, on the outskirts of Lima. (Photo change.org)

It never rains but it pours

The rate of child labour in Peru is amongst the highest in Latin America. According to the mapping carried out last year by the Global March Against Child Labour, 21.8% of children between the ages of 5 and 17 years (1.6 million) were in child labour however, the percentage is believed to be higher because of under-registration of girls and adolescent women. The latest data from the National Institute of Statistics and Informatics (INEI) indicates that child labour decreased by 4.3% between 2012 and 2018, with a lower current figure of 1.1 million children and adolescents, of which the vast majority are below the minimum age to work, (14 years in Peru), one of the lowest in the region. The proportion is five times higher in rural areas, and 99.6% of adolescents work in the informal economy.

In the last three years, Peru has received more than 860,000 Venezuelan migrants and refugees, including 160,000 children and adolescents, in some cases without the accompaniment of family members. According to the Ministry of Education, only 56,000 were in school before the pandemic. Their families have not been considered in the government’s financial aid programmes, despite being in a situation of extreme vulnerability. One of the most serious impacts of the pandemic on these children and adolescents is the deterioration of their mental health, also having to endure xenophobic insults and discriminatory treatment.

One of the harshest effects of the pandemic on children and adolescents in vulnerable situations and on their families is hunger caused by the loss of income. The impact would have been even worse if many families would have not organised to prepare food collectively, in what is called “ollas comunes” (communal pots). In the country, 8.1 million people were left without work and poverty grew by 10%. Almost a third of the recipient families did not receive the government-issued voucher, and 83.2% of those who received it were unable to cover the minimum monthly expenses.

The closure of schools has left many children and adolescents without education. Although the government promptly launched the “Aprendo en casa” (I learn at home) strategy, a large part of students are not being able to access virtual classes, because in Peru only 3 out of 10 families have internet and a computer at home, and in rural areas only 6%. Additionally, during the first two months of the quarantine, children and adolescents did not receive food which is distributed in public schools via the “Qali Warma” programme.

When this article was written, boys and girls have already been in confinement for 100 days. Paradoxically, staying at home increases the risk of being victims of mistreatment and sexual abuse. During the confinement, there have been 23 femicides and 350 rapes and other sexual assaults on minors.

Children and adolescents who live or are linked to the street have simply been left with no place to live.

The effects of the COVID-19 pandemic on child labour

The truly devastating economic impact of the pandemic places the future of child labour on a bleak forecast. Specialists calculate that the fall in GDP in Peru will be 12%, more than double the decrease for the rest of Latin America at 5.3%, calculated by the Economic Commission for Latin America and the Caribbean (ECLAC). Unemployment and the reduction of self-employment are reaching unprecedented figures, causing the informal economy to increase, which in Peru already occupies more than 70% of the Economically Active Population (EAP). Almost all micro-businesses are on the verge of bankruptcy, and many others are not able to access the credits that the State is granting. Poverty and extreme poverty will continue reaching millions of people.

The International Labour Organization (ILO) estimates that it is very likely that child labour, especially hazardous work, will increase between 1% and 3% in the region, between 109 thousand and 300 thousand children and adolescents. This would be a setback compared to the progress made in recent years, moving away from the prospect that Latin America and the Caribbean would become the first developing region to eradicate child labour, and reach the UN Sustainable Development Goal (SDG) Target 8.7 on ending child labour by 2025.

What needs to be done?

The Peruvian government began facing the pandemic with an agenda called “primero la vida” (life first), including compulsory confinement but with the granting of economic vouchers and food baskets for the subsistence of the most vulnerable families since they could not go out to work. However, it gradually turned towards a “reactivación económica” (economic reactivation) agenda, giving priority to the progressive opening of economic activities, without giving continuity to social protection measures.

At this moment, the country is in the dilemma between ending or continuing with the quarantine. Economic reasons push the government to end compulsory confinement, but from a public health perspective, and according to many specialists, Peru is at the worst stage to end confinement. Specialists have further advised to maintain it even with the risk of aggravating the economic situation. It is highly probable that in the immediate future, the reactivation of companies, which is needed, will continue to be favoured, but it is worrying to see the State neglect its obligation to protect the most vulnerable sectors.

We as civil society demand for priority to the protection of the rights of children and adolescents, especially those who are at risk of entering the labour market too early and performing hazardous activities (due to their situation of poverty, for living in rural areas, belonging to native or indigenous communities, or being migrants or refugees). It is unacceptable that the State looks the other way, leaving families with no other option but to have child labour as a way to mitigate the lack of income.

Many of the proposals that we made in 2019, as Global March Against Child Labour in the region, towards the achievement of Target 8.7 of the SDGs are more relevant today. First, to put into practice the “prioridad por la infancia” (priority for children), allocating resources in national budgets for specific policies on the protection of children and adolescents from child labour and its worst forms, educational exclusion, violence, exploitation. No child or adolescent, nor their families, should be left behind.

According to ECLAC, protecting the well-being of children and adolescents in Peru, through temporary monetary transfers to the families of children and adolescents in child labour situations, would cost just 0.2% of GDP for 3 months, and 0.3% for 6 months. Considering that the Peruvian government plans to invest 12% of its GDP to face the effects of the pandemic, this distribution is possible. One way to do this is via the “Juntos” cash transfer programme, (including families where child labour exists), that aims to prevent boys and girls from entering child labour and prevent adolescents from performing hazardous activities, along with guaranteeing no interruption to their education. 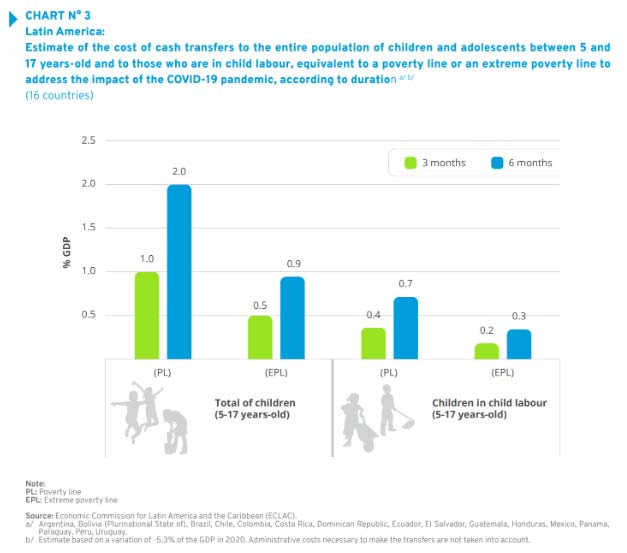 Moreover, today more than ever, the Ministry of Education must strengthen inclusive educational modalities, aimed at favouring the access and permanence of inclusion of children and adolescents in child labour situations in the school system, and developing strategies that promote a smooth transition from school to work. Several of these strategies already exist formally but are not implemented.

Further, the rural areas possess the lowest tiers of the supply chains of products that go to the national and international market, in which child labour and forced labour have been identified. To prevent an increase in child labour, it is necessary to strengthen labour inspection and to count on a greater commitment from the business sector. The Ministry of Labour must not back down in promoting the “Sello Libre de Trabajo Infantil” (Child Labor Free Seal) recognition.

Last but not least, it is necessary to carry out stronger action to make child labour socially and politically visible as an intolerable violation of the rights of children and adolescents. Child labour is a very normal and tolerated problem in Peruvian society, even by the institutions that claim to protect children and adolescents. As long as there is no conviction that child labour must be eradicated and there is no strong social and citizen-led demand for its attention, the government will not prioritise it. 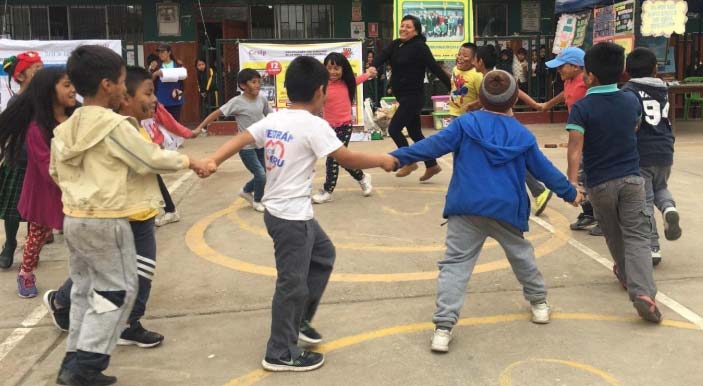 A great opportunity approaches with 2021, which is already a few months away. The year 2021 has been declared by the United Nations General Assembly as the International Year for the Elimination of Child Labour. On this line, the Peruvian government became one of the Pathfinder Countries of Alliance 8.7, explicitly committing itself to accelerate the rate of reduction of child labour, with a national policy on the subject. This is the time to uphold this commitment and move forward towards a child labour free Peru. This is the moment.

Isaac Ruiz Sánchez  is a member of CESIP – “Centro de Estudios Sociales y Publicaciones” (Center for Social Studies and Publications). He is a representative of civil society in the Steering Committee for the Prevention and Eradication of Child Labour in Peru (CPETI) and coordinates the activities of Global March Against Child Labour in his country. 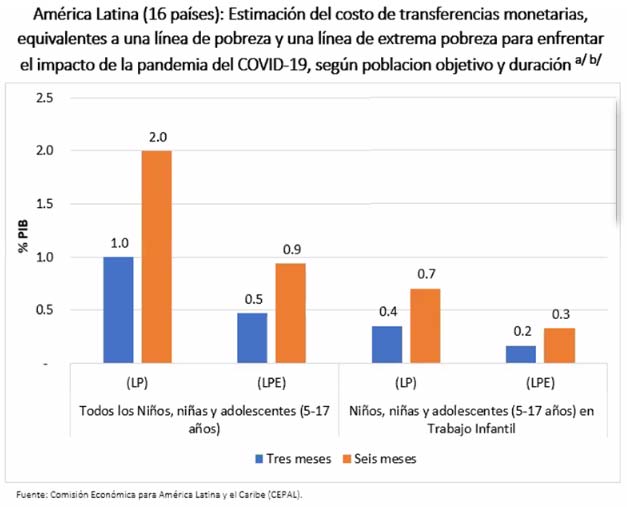