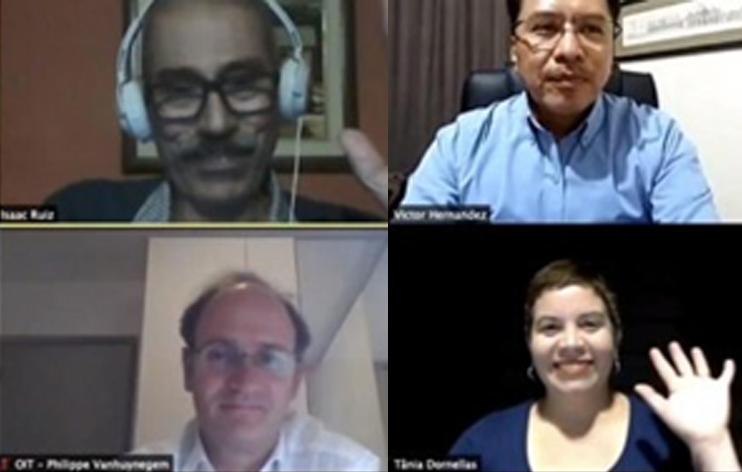 As part of the commemoration of the World Day against Child Labour, the Global March against Child Labour Latin America, a network of which Corporación Opción has been a member since 1998, held the Virtual Dialogue yesterday, 16 June “Child and Adolescent Labour: Covid-19 and Post-Pandemic in Latin America”, with the participation of Philippe Vanhuynegem (Belgium), Director of the ILO Office for the Andean Countries; Tânia Dorsellas (Brazil), representing the Global March for South America; and Victor Hugo Hernández (Guatemala), representing the Global March of Central America. Isaac Ruiz (Peru), a researcher at CESIP, was the moderator.

The three invited panelists agreed on the diagnosis of Latin America, emphasizing that the countries of the region, since before the arrival of the pandemic, have been characterized by their social vulnerability, high percentages of workers in the informal market, high levels of social inequality and the migration crisis. These difficulties create a complicated scenario to face the problems that the covid-19 is leaving, creating fertile ground for child labour to increase.

Vanhuynegem emphasized the high numbers of informal work in Latin America, which makes the current situation even harder for those families who are in this position and who must remain confined. This is in addition, he explained, to the weak social and health protection systems that characterize this part of the continent, which cause this health, social and economic crisis to hit the population in an unequal way depending on its socio-economic level. In this sense, he called for the need to generate a new social pact to avoid a greater rupture of the social fabric, indicating that the authorities must promote social dialogue in order to reach agreements.

In the same vein, Tânia Dorsellas argued that emergency income must be guaranteed for families, since the crisis is so profound that it puts at risk subsistence: if this basic right is not guaranteed, neither are the rights to education and health. The representative of the Global March in South America also expressed her great concern about the impact that the crisis will have on the achievement of the Sustainable Development Goals (Sdgs), whose agreed deadline is 2030.

Victor Hernandez, meanwhile, expressed his concern about the uncertainty of returning to school, which could lead many children and adolescents to abandon the school system, mainly because their families have had to prioritize the generation of economic resources. The Guatemalan expert explained that this phenomenon can be very harmful to child labour, considering that education is a protective factor.

In conclusion, the panellists stressed the need for public policies aimed at supporting especially children, adolescents and women, in order to prevent child labour rates from continuing to rise, indicator that even before the pandemic had been reduced in Latin America.