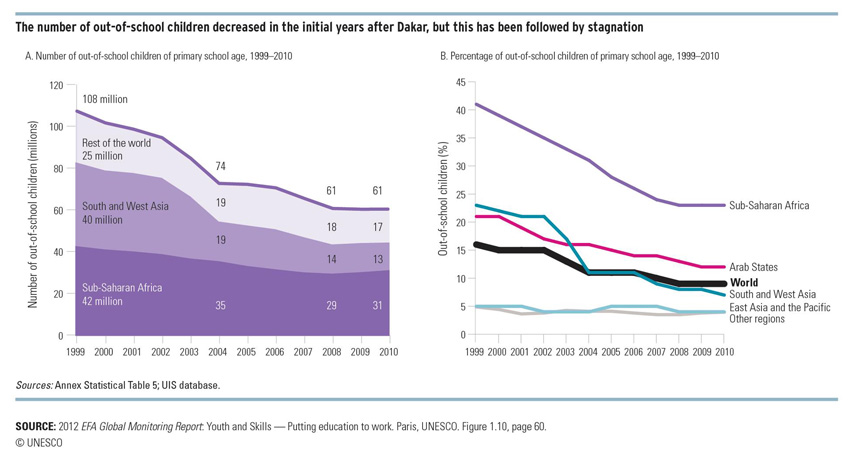 16 October 2012: With one in eight young person across the world looking for work, the focus on young people, their education and skills and youth unemployment has gripped the world. In May this year, the International Labour Organization (ILO) called for an urgent investment in opportunities for young people to tackle the challenge of growing youth unemployment. The 10th Education For All (EFA) Global Monitoring Report “Youth and Skills: Putting Education to Work” launched by UNESCO today focuses on young people and youth skills.

Twelve years since the world committed to the six EFA goals, the world is still not on track. Progress has been uneven, while there has been expansion of early childhood care and education and improvements in gender parity at primary levels. The number of out-of-school children has stalled at 61 million, not only denying millions of children of their right to education but also potentially putting them in the category of under-aged child labourers, jeopardising wider development efforts. Similarly, adult literacy and quality of education are still far behind the 2015 goal post.

“The international community and every country must ensure secondary education for all children and that which is with quality, employability and entrepreneurship,” said Kailash Satyarthi, Chairperson, Global March Against Child Labour.“It must also eradicate child labour with utmost political will in order to create decent work for youth. Until these pre-requisites are fulfilled, the world will have to face serious problems and will waste the most potential human resources – the youth.”

The stalling in the numbers of out-of-school children is coupled worriedly with the stagnation in aid at US$13.5 billion in 2010, of which US$ 5.8 billion was for basic education. This is insufficient to fill the US$16 billion financial gap low-income countries face, with sub-Saharan Africa receiving only half of the increase it was promised.

Some key donors as not only reducing their overall aid budgets, but also making education a low priority (e.g. Netherlands). The fact that many countries in the last decade made progress towards EFA by increasing their spending on education substantially or maintaining it at high levels clearly points towards the importance of funds for education- whether through donors or out of national budgets. There is also a need to turn natural resources into government revenue and utilise them efficiently for reaching the EFA goals. As is harnessing the potential of private organisations as potential alternative sources of finance for the education sector. And, this is a wise business case – as for every US$1 invested in education and skills, as much as US$10 to US15 can be generated in economic growth.

Gender parity and quality concerns are resonated yet again in the report. In 85 out of 146 countries with data for 2005 – 2010, more women than men are illiterate.Of these countries, 21 display extreme gender disparity with fewer than 7 literate women for every 10 men that are literate. And, 68 countries have still not achieved gender parity in primary education, with girls being disadvantaged in 60 of them.

It states that out of the 650 million children of primary school age, the 130 million who are in school are failing to learn the basics. The reason being among other things, lack of teachers and adequately trained teachers. If quality of education is not addressed with utmost priority, these children will complete school with little or no useful skills that will make it difficult for them to join mainstream and productive jobs on adulthood. It would be as good as not going to school at all.

The global economic crisis in recent years brought with it a particular challenge – bourgeoning youth unemployment and joblessness. The world is facing a worsening youth employment crisis: young people are three times more likely to be unemployed than adults and over 75 million youth worldwide are looking for work. The ILO has warned of a “scarred” generation of young workers facing a dangerous mix of high unemployment, increased inactivity and precarious work in developed countries, as well as persistently high working poverty in the developing world. Globally, an estimated 152 million young people – 28% of all young workers are paid less than US$1.25 per day, precipitating the vicious cycle of illiteracy, exploitation and poverty.

The EFA GMR 2012 reports that worldwide 71 millions adolescents of lower secondary school age were out of school in 2010. This number has stagnated since 2007 causing much concern. Three out of four out-of-school adolescents live in South and West Asia and Sub-Saharan Africa, leaving millions of young people to face life without foundation skills they need to earn a decent living. One of the main challenges in child labour is how to substitute hazardous child labour into decent youth employment, particularly in informal work, so that young people remain in employment, earning decent wages and learning skills.

Furthermore, with many countries experiencing a youth bulge (especially in Sub-Saharan Africa) and high levels of youth employment, focus on skills development to harness the potential of youth is imperative to reap benefits of this demographic dividend, to maintain peace and national development and growth.