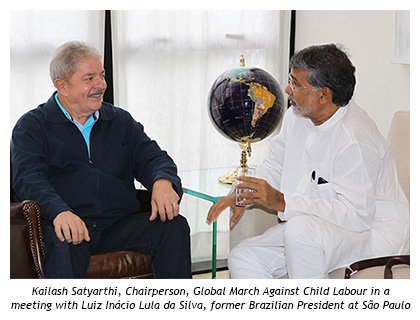 As stated by Kailash Satyarthi, Chairperson, Global March Against Child Labour while representing the civil society fraternity at the inaugural session of III GCCL, the journey hereafter is predictably fraught with challenges of tackling the 6 Emergencies or the 6Es namely, Education, Enforcement, Employment, Economic, Ecological and Ethical emergencies that now lay out an obstacle course in reaching out to the “hardest to reach children”. Thus it is absolutely imperative to expedite action against child labour in order to keep the promise made to the most vulnerable children across the globe and pave way for concerted and convergent efforts by all the stakeholders without subrogation of responsibility and accountability.

Therefore, Global March in the follow up of Brasilia Declaration that was adopted at the end of III GCCL recently undertook a visit to Brazil for further streamlining worldwide action against child labour in conjunction with the Host Government. The Chair of Global March met key stakeholders including Minister of Social Development & Hunger Alleviation of Brazil, Ms. Tereza Campello; Special Advisor to President Dilma Rousseff, and former President Lula for intensifying action to prioritise child labour elimination in the regional, national and international agendas. The key was to not lose focus on effective implementation of laws particularly guaranteeing freedom of children from exploitation to education; mobilisation of political will of the leaders across the globe; learning and dissemination of good practices in the best interest of children; and allocation of adequate resources for ensuring social protection of vulnerable children and their families.

Kailash Satyarthi also met the trade unions, civil society organisations and ILO officers in Brasilia for securing their re-energised commitment in the collective fight to eliminate child labour so that all stakeholders could surge ahead on the path chalked out in the Brasilia

Global March on behalf of the civil society organisations calls upon all actors to work towards making this world much safer and just for children, because child labourers cannot wait any more. 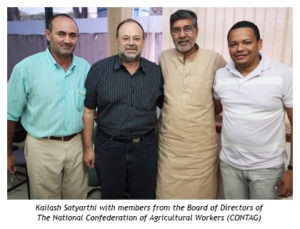 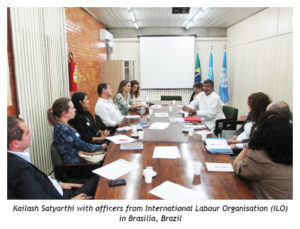 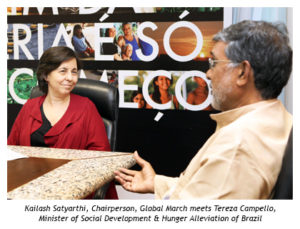