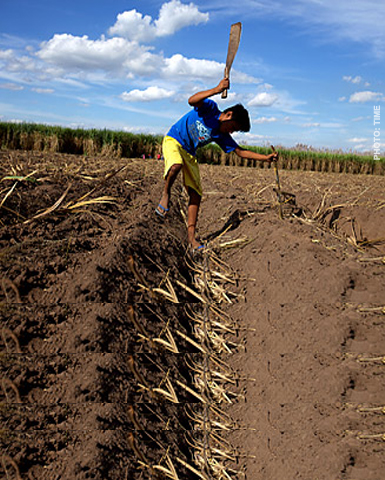 At a rare forum in Costa Rica bringing together more than a dozen organizations from Central and South America at a critical moment in the struggle against child labour in the hemisphere, the message was clear:  The surge in authoritarian governments across the region is threatening years of progress.

“This is particularly worrying,” said Global March Against Child Labour founder Kailash Satyarthi, “since Latin America has seen some of the most significant progress over the past decade to eliminate child labour.”  Satyarthi won the Nobel Peace Prize in 2014 for his decades of rescuing tens of thousands of child labourers and advocating for the rights of children.

From the viciously anti-civil rights platform of newly-elected President Jair Bolsonaro in Brazil to the string of authoritarian governments coming to power in Central America, child labour activists in the region feel embattled and under pressure.  The forum participants from Nicaragua said flatly they would not be able to hold such a meeting of anti-child labour groups in the current atmosphere in their country.  Fortunately, the government of Costa Rica remains committed to addressing child labour and participated in the opening of the forum.

When Bolsonaro spoke out recently promoting labour for children as young as eight or nine, his Minister for Human Rights, Family and Women, Damares Alves, shot back:  “Let us be clear that for children to work is a violation of their rights, something that cannot be allowed.”

Forum participant and Global March member Brazilian National Forum for the Prevention and Eradication of Child Labour (FNPETI), also condemned the President: “FNPETI publicly expresses its vehement repudiation of the statement of Mr. Jair Bolsonaro. . .  The declaration reveals a total disregard for the 1988 Federal Constitution. . . which prohibits all forms of child labour under the age of 16.”  FNPETI went on:  “It also disrespects the commitment made by the Brazilian State in ratifying international treaties, in particular the Sustainable Development Objectives (ODS), and increases the challenge of achieving the goal of eliminating all forms of child labour by 2025.”

Despite immense constraints, activists and their organizations are keeping the pressure on and are looking to make significant strides in the effort to eradicate child labour.  To that end the Global March convened 16 Latin American member organisations to take stock of the anti-child labour situation in the region and map out actions to address the child labour struggle.

The two-day forum was organized and hosted by Global March Board Member Defensa de Ninas y Ninos Internacional (DNI) Costa Rica on June 24-25.  DNI Executive Director Virginia Murillo said, “This forum was a scenario of great importance to strengthen the Global March in Latin America. The Forum convened organisations from 12 countries in the region who reaffirmed their commitment, willingness and enthusiasm to work on a jointly built Action Plan for the next two and a half years.”

This was the first opportunity for years for the groups all together to exchange and discuss progress and challenges to achieve Sustainable Development Goal 8.7 and define strategic work in the sub-regions of Central and South America.  They held  discussions on the progress and challenges in the achievement of SDG 8.7 at the national and subregional levels, concluding with the adoption of a joint agenda to end of 2021 where three main strategic lines of work were defined:  Counteract the naturalisation of child labour and its cultural perception by increasing awareness raising; mobilise advocacy to include child labour as a violation of rights within the agenda of the rights of the child; and address child labour in corporate value/supply chains.

Three key obstacles that emerged from deliberations by both the Central and South American groups were shared by both regions:  corruption, high economic inequality, and governments’ lack of commitment to adequately fund education.  While these are systemic and long-standing problems with governments in the region, the rise of the authoritarian right promises to intensify these trends.

One exception in this picture is Paraguay, where the government has instituted subsidies for families to promote education, health and social protection.  The Global March member Dequeni is a key actor in Paraguay as a member and part of the technical team of the National Commission for the Eradication of Child Labour (CONAETI) in which they have contributed to the indicators for the National Strategy for the Prevention and Eradication of Child Labour. Dequeni, as a member and part of the coordinating commission of the Front for Children and Youth (network of children’s organisations), worked jointly with the government, promoting 20 commitments to protect children in the country, including one directly related to the SDG 8.7 for which Dequeni is responsible for compliance monitoring. These commitments were signed and ratified by President Mario Abdo Benitez in 2018.

“Despite the legal frameworks and regulations in place, institutional weakness along with authoritarian governments have a lack of interest in prioritizing children’s issues and in particular child labour in the region,” said Ryan.

Nevertheless, the organizations came away from the forum with renewed energy, in part from their opportunity to share their struggles and ideas for progress, and perhaps most importantly, to know they are not alone and have allies throughout the region and the world.

Timothy Ryan is the Chairperson of the Global March Against Child Labour.