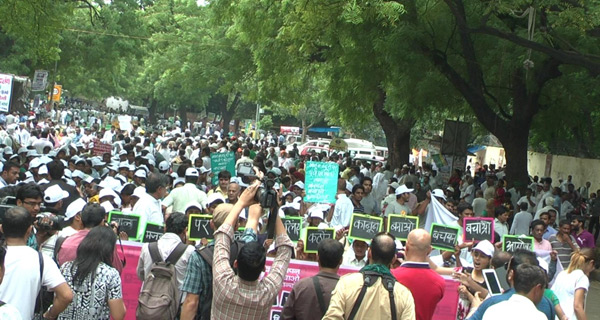 On 29th August 2013, more than 300 children in New Delhi, India supported by adults marched to the Parliament demanding the passage of the Child Labour (Prohibition and Regulation) Amendment Bill, which would prohibit hazardous work for all children below 18 years. It will also ban any employment of children below 14 years thereby aligning with the Right to Education Act.  The children’s march was convened by the Global March’s partner organisation Bachpan Bachao Andolan (BBA). Global March Against Child Labour, Walk Free and Avaaz joined BBA to deliver 1 million petition signatures on behalf of the global community outraged over Indian laws and practices that push around 55 million (according to civil society estimates) Indian children to labour in deplorable working conditions. The petition called on the Indian Parliament to pass the Child and Adolescent Labour (Prohibition and Regulation) Bill without further delay.  After leading the march to the Parliament, members of National Children’s Parliament also submitted a memorandum to Prime Minister's Office demanding a complete ban on child labour in the country.

Expressing discontent on Government of India’s inaction in terms of ratification of ILO Convention 138 on Minimum Age of Employment and Convention 182 on Worst Forms of Child Labour, Chairperson of Global March Against Child Labour, Mr. Kailash Satyarthi at the march said, “Indian legislators have failed the children yet again. It only goes to show how insensitive towards the children of the country, its polity is. It is rather surprising that despite being home to the largest number of child labourers under the age of 14 in the world, India is one of the barely eight countries like Somalia, Tuvalu, Eritrea etc that have not ratified ILO Convention 182. Likewise India is one of the handful nations that are yet to ratify ILO Convention 138.”

He further said, “It is disheartening that child labour elimination is not on the priority list for our law makers and that is precisely why the Child Labour (Prohibition and Regulation) Amendment Bill is yet to be discussed and voted in the Parliament, while the Food Security Bill has already been passed by both the houses of Indian Parliament and awaits to be assented by the President”. Being a founding member of the ILO it is quite a blot on the image of India for not having ratified these two core conventions. Once the child labour law is amended it would pave way for the ratification of both the ILO Conventions”. On behalf of Global March, Mr. Satyarthi urged the Indian Parliament to pass the Child Labour (Prohibition and Regulation) Amendment Bill on the next business day exemplifying its leadership in child labour elimination just ahead of the Global Child Labour Conference to be held in Brazil this October.

“Parliamentarians have not found time to debate a legislation that may protect millions of children from exploitation and slavery. Because children are not voters!” lamented R S Chaurasia, Chairperson of Bachpan Bachao Andolan.

Commenting on the delay by the Indian Parliament in passing the child labour law amendment bill, Ms. Debra Rosen, Movement Director at Walk Free said “Child labour in India is a tragedy and the Indian parliament needs to pick up where they left off in May and pass the Child and Adolescent Labour (Prohibition and Regulation) Amendment Bill immediately. Millions of children who should be in school are instead bought and sold to work in deplorable conditions for hours on end as sex workers, bonded laborers, or domestic servants. The world’s children deserve more.”

The march to the Parliament was supported by the trade and teachers’ union including Indian National Trade Union Congress, Centre of Indian Trade Unions, and All Indian Primary Teachers Federation, and other child rights organizations in the country.

Global March Against Child Labour has been actively supporting civil society partners in India in their collective demand for a strong anti-child labour law in the country. Over the last 15 months Global March organized several national and state level consultations involving all stakeholders like top bureaucrats from the Ministry of Home Affairs & Ministry of Labour and Employment; State Commissions for Protection of Child Rights, Trade Unions, Employers’ Association, Teachers’ Unions and Child Rights organizations and UN Agencies build a consensus on a strong child labour law in terms of rehabilitation of child labourers, accountability of law enforcement officials, stronger and deterrent punishments for the offenders etc.

In the coming months Global March and partner organizations in India would reach out to the Parliamentarians yet again with a firm request for an early passage for the amendment bill in the next legislative session with utmost urgency.