Admit it. You love cheap clothes. And you don't care about child slave labour

Despite a series of revelations for the Observer about the brutal conditions in garment factories, companies, western consumers and India are still complicit in turning a blind eye 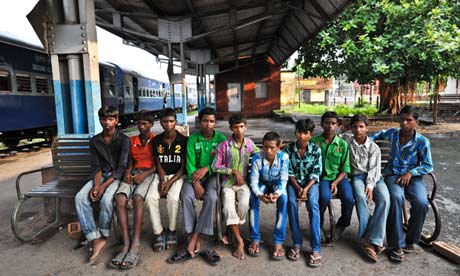 Young boys rescued from child traffickers at Katihar station in Bihar state, India, waiting for their parents to collect them. Photograph: Gethin Chamberlain for the Observer

Until three years ago I did not believe in magic. But that was before I began investigating how western brands perform a conjuring routine that makes the great Indian rope trick pale in comparison. Now I'm beginning to believe someone has cast a spell over the world's consumers.

Last week I revealed how poverty wages in India's tea industry fuel a slave trade in teenage girls whose parents cannot afford to keep them. Tea drinkers were naturally upset. So the ethical bodies that certified Assam tea estates paying a basic 12p an hour were wheeled out to give the impression everything would be made right.

For many consumers, that is enough. They want to feel that they are being ethical. But they don't want to pay more. They are prepared to believe in the brands they love. Companies know this. They know that if they make the right noises about behaving ethically, their customers will turn a blind eye.

So they come down hard on suppliers highlighted by the media. They sign up to the certification schemes – the Ethical Trading Initiative, Fairtrade, the Rainforest Alliance and others. Look, they say, we are good guys now. We audit our factories. We have rules, codes of conduct, mission statements. We are ethical. But they are not. What they have done is purchase an ethical fig leaf.

In the last few years, companies have got smarter. It is rare now to find children in the top level of the supply chain, because the brands know this is PR suicide. But the wages still stink, the hours are still brutal, and the children are still there, stitching away in the backstreets of the slums.

Drive east out of Delhi for an hour or so into the industrial wasteland of Ghaziabad and take a stroll down some of the back lanes. You might want to watch your step, to avoid falling into the stinking open drains. Take a look through some of the doorways. See the children stitching the fine embroidery and beading? Now take a stroll through your favourite mall and have a look at the shelves. Recognise some of that handiwork? You should.

Suppliers now subcontract work out from the main factory, maybe more than once. The work is done out of sight, the pieces sent back to the main factory to be finished and labelled. And when the auditors come round the factory, they can say that there were no children and all was well. Because audits are part of the act. Often it is as simple as two sets of books, one for the brand, one for themselves. The brand's books say everyone works eight hours a day with a lunch break. The real books show the profits from 16-hour days and no days off all month.

Need fire extinguishers to tick the safety box? Hire them in for the day. The lift is a deathtrap? Stick a sign on it to say it is out of use and the inspector will pass it by. The dark arts thrive in the inspection business. We, the consumers, let them do this because we want the shiny, pretty thing. And we grumble that times are tight, we can't be expected to pay more and, anyway, those places are very cheap to live in.

This is the other part of the magic trick, the western perception of the supplier countries, born of ignorance and embarrassment. India, more than most, knows how to play on this. Governments and celebrities fall over themselves to laud India for its progress. India is on the up, India is booming, India is very spiritual, India is vibrant. Sure, the workers are poor, but they are probably happy.

No, they are not. India has made the brands look rank amateurs in the field of public relations. Yes, we know it is protectionist, yes, we know working conditions are often diabolical, but we are in thrall to a country that seems impossibly exotic.

Colonial guilt helps. The British in particular feel awkward about India. We stole their country and plundered their riches. We don't feel able to criticise. But we should. China still gets caught out, but wages have risen and working conditions have improved. India seems content to rely on no one challenging it.

Last week India's powerful planning commission claimed that poverty was at a record low of 21.9% of the population. It did so on the basis that people could live on 26 rupees (29p) a day in rural areas (33 rupees in urban areas). Many inside India baulk at this. Few outside the country did so.

But times are tough, consumers say. This is the most pernicious of the ideas the brands have encouraged. Here's some maths from anObserver investigation last year in Bangalore. We can calculate that women on the absolute legal minimum wage, making jeans for a WKC, get 11p per item. Now wave your own wand and grant them the living monthly wage – the £136 the Asia Floor Wage Alliance calculates is needed to support a family in India today (and bear in mind that the women are often the sole earners). It is going to cost a fortune, right? No. It will cost 15p more on the labour cost of each pair of jeans.

The very fact that wages are so low makes the cost of fixing the problem low, too. Someone has to absorb the hit, be it the brand, supplier, middleman, retailer or consumer. But why make this a bad thing? Why be scared of it?

Here is the shopper, agonising over ethical or cheap. What if they can do both? What if they can pluck two pairs of jeans off the rail and hold them up. One costs £20. One costs £20.15. It has a big label on it, which says "I'm proud to pay 15p more for these jeans. I believe everyone has the right to a decent standard of living. My jeans were made by a happy worker who was paid the fair rate for the job."

Go further. Stitch it on to the jeans themselves. I want those jeans. I want to know I'm not wearing something stitched by kids kept locked in backstreet godowns, never seeing the light of day, never getting a penny. I want to feel clean. And I want the big brands and the supermarkets to help me feel clean.

I want people to say to them: "You deceived us. You told us you were ethical. We want you to change. We want you to police your supply chain as if you care. Name your suppliers. Open them to independent inspection. We want to trust you again, we really do, because we love your products. Know what? We don't mind paying a few pennies more if you promise to chip in too."