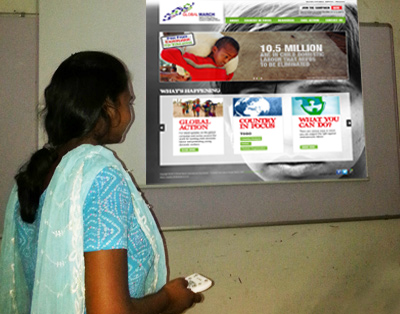 Shanti’s presence on June 12th, the World Day Against Child Labour, at the Global March’s office was symbolic. For over three years, Shanti (name changed), a former child labourer was inflicted with pain and abuses, by her employer. She was sold to a family for Rs. 22,000 (~US 400) by one placement agency. She was under house arrest for years and was not given a single penny for the work she was employed for. Tortured mentally and physically, she is currently three months pregnant. Her aunt made all possible efforts to find her with the meager resources she had. She finally approached Global March’s Indian partner Bachpan Bachao Andolan (BBA) and was recently rescued by BBA with the help of Delhi Police.

The Global March’s movement started as a physical march demanding an end to child labour in Geneva. It lead to ILO Convention 182 on worst form of child labour and a special day to raise alarm against seriousness of child labour and actions needed to eliminate it. Each year 12th June, brings together governments, employers and workers organisations, civil society, and millions of people from around the world together to highlight the plight of child labourers.

On this occasion, Mr.Kailash Satyarthi, founder of BBA and Chairperson of Global March said, “Shanti has been given a life to live, to hope and dream. It is an accomplishment for Global March and its Indian partner BBA, whose vision is for a world free from child labour. It also reminds us of the millions of children still languishing in labour and denied the right to an education worldwide. It is an honour for everyone present here to witness Shanti launch the campaign website and feel motivated to give their hundred percent in the fight against child labour”.

The 2013 world day also reminds all of the 15 million child domestic workers worldwide. Global March’s campaign FREE: Free from Exploitation for Education, is dedicated to raise awareness on this invisible form of slavery and calls for ratification of the Convention 189 on decent work for domestic workers.