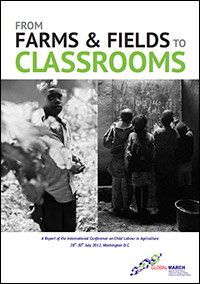 Recognising that firstly, agricultural child labour is a multi-faceted problem, among others a manifestation of the poor state of rural areas in terms of poverty, inadequate public infrastructure, etc. and the marginalisation of farmers, workers and their families in the agricultural supply chain due to weak and fragmented farmer’s organisations, trade unions, etc.; and secondly the need to address the issue of agricultural child labour on a priority basis for the timely attainment of the targets laid out in the Roadmap 2016 for the Elimination of the Worst Forms of Child Labour, Global March Against Child Labour (GMACL) organised a multi-stakeholder International Conference on Child Labour in Agriculture in Washington D.C., United States of America (USA) from 28 -30 July, 2012.