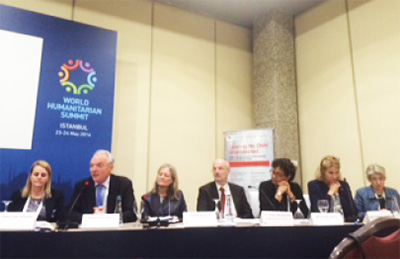 On 23-24 May 2016, United Nations organised the first World Humanitarian Summit in Istanbul, Turkey where world leaders and the international community came together to address today's humanitarian crises that are the causes of conflicts and disaster. These crises have displaced more than 60 million people where children have suffered the most. Prone to more vulnerability, children in such delicate times remain the worst sufferers who continue to be attacked, used as combatants, abused physically and sexually, raped and forced into some of the most abusive forms of work such as sex slavery and soldiering. UNICEF estimates that 50-60% of the population affected by disasters is children and nearly a billion children live in countries that were affected by conflict in 2013 or 2014 alone. Given the mentioned backdrop, in the absence of educational systems for children, due to legal and social barriers to employment for adults and cultural inappropriateness for women to work, millions of children go missing into the shackles of bonded or forced labour in the hopes that resources gained will enable other family members to survive. Moreover, there are a large number of children that migrate unaccompanied and eventually find themselves in the worst forms of child labour.

Thus World Humanitarian Summit aimed to restructure the humanitarian system and presented an unprecedented opportunity for all humanitarian actors to reconfirm their commitment to respond to disasters and emergencies and ensure their actions address the root causes of crises through context-appropriate responses and risk management.

While food, hunger, lack of security, unemployment, climate change, terrorism and refugee crises found its due place in the Summit, Global March along with its partner the Kailash Satyarthi Children’s Foundation positioned the increasing concerns of child labour being rampant in the situations of disasters and conflicts through a side event called “Leave No Child Unprotected: Child Protection Across Development and Humanitarian Divide”.

For more details and discussions held at the Side Event, read this report.