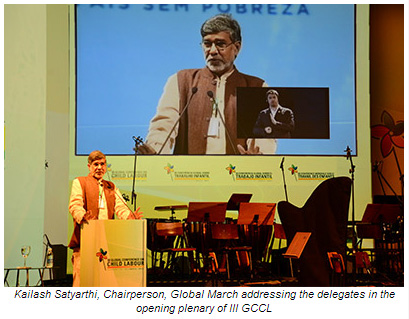 17 October 2013: Global March Against Child Labour marked its prominent presence at the recently held Global Conference on Child Labour in Brazil. The host government had invited Kailash Satyarthi, Chairperson of Global March to represent the civil society fraternity at the opening and closing sessions of the conference.

As one of the four constituents of the conference i.e. governments, employers’ organisations, workers’ organisations and the civil society, Kailash Satyarthi called upon the 1300 delegates from over 150 countries for bold, innovative, holistic and urgent action against child labour.

Three other speakers who spoke in the opening plenary along with Kailash Satyarthi were Brazilian Minister of Social Development and Fight Against Hunger, Tereza Campello; Dutch Minister of Foreign Trade and Development Cooperation, Liliane Ploumen; representative of the International Organization of Employers (IOE), Octavio Carvajal Bustamante and representative of the International Trade Union Confederation (ITUC), Jeroen Beirnaert.

The high profile delegation at the conference included representation by ministers from over 37 governments across the world.

Setting the tone and context of the conference from civil society’s perspective, Kailash Satyarthi in the opening plenary demanded* that:

“The war (against child labour) can not be won without strong, committed, coherent and well-resourced worldwide movement. Equally needed is a genuine and active coordination between intergovernmental agencies at the highest level,” was the rallying call by Kailash Satyarthi. Towards this he called for:

In the preparation for the III GCCL, the International Secretariat of Global March also played an important role in facilitating the child labour dialogues online which entailed discussions on pertinent themes like social protection, education and training, national legislation and enforcement and labour market policy with a varied range of stakeholders from across the world. Global March with ILO, Telefonica Foundation, Government of Brazil launched the Virtual March "For a free world form child labour", an application that allowed Facebook users to protest against child labour. The initiative introduced several innovations of communication, increasing awareness and mobilisation to encourage global participation towards child labour elimination.

Additionally, Global March members and partners had liaised with their national governments for possible inclusion in their respective delegations to the conference. They also implemented awareness-raising and lobbying campaigns around the conference, its goals and the outcome document, taking into account the national concerns and situations.

At the conference Kailash Satyarthi interacted with over 40 adolescents and young people from 23 Brazilian states to emphasise on the pivotal role that they play in the fight against child labour. The teens were resolute about spreading awareness on the subject of child labour among their peers, relatives and families. They also pledged support for mobilising collective will for rooting child labour out of the system. At the official closing these adolescents presented a charter of demands calling upon the International fraternity to accelerate action against child labour.

Global March’s members and partners unequivocally voiced their collective opinion that fight against child labour cannot succeed without an agenda to protect all children from exploitation and to ensure that they benefit from good quality education, decent living standards and fulfilled, safe and happy childhoods. Global March strongly upheld its stand that the issue of child labour cannot be looked in isolation and should be viewed with the lens of overarching cross cutting issues like denial of fundamental and universal rights like right to education and decent working conditions for the adults.

Reminding the stakeholders of their commitments and responsibilities towards the 168 million child labourers that continue to languish day and night, Kailash Satyarthi in the closing session of the conference called upon the global fraternity to do whatever it takes to transform child vulnerability to youth empowerment till we meet next in Argentina in 2017.

For a brief update on III GCCL, please click here 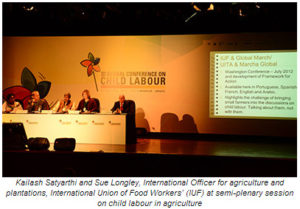 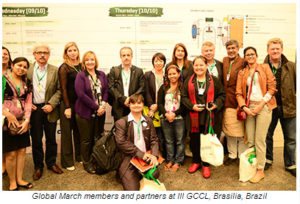 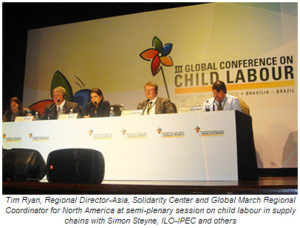 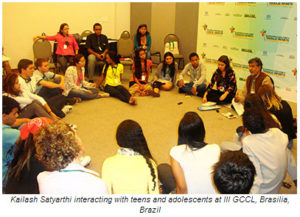