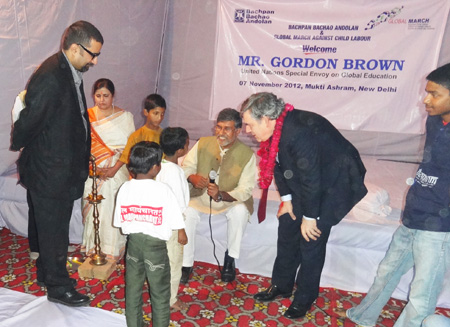 New Delhi: 08th November 2012: Diwali (the festival of lights in India) became brighter for the children of Mukti Ashram (short term rehabilitation centre of Bachpan Bachao Andolan in Delhi) when the United Nations Special Envoy for Global Education, Mr. Gordon Brown visited it last evening. Mr. Brown expressed his immense committement as the Special Envoy for Global Education to make the elimination of the worst forms of child labour and its linkages with education a top priority for the United Nations in 2013. In spite of an extremely busy schedule with meetings lined up with the President and Prime Minister of India, Mr. Brown spared time to interact with children rescued from slavery and bondage, undergoing rehabilitation at Mukti Ashram. The visit to the Ashram was jointly organised by Bachpan Bachao Andolan and Global March Against Child Labour.

The former Prime Minister of United Kingdom, Mr.  Gordon Brown is the pioneer in promoting education on the global agenda. He is an unparalleled visionary to have cross-linked education for all with elimination of child labour, filling in the teachers’ deficit and the dire need for adequate financing by the Governments across the world.

Razia Sultan, a former child labourer rescued from football stitching in Meerut requested Mr. Brown on behalf of all the children at Mukti Ashram to take the children’s message of complete abolition of child labour and guarantee of education to the United Nations. Lighting the lamp, Mr. Brown assured all the children that he would continue to support the global movement against child labour and ensuring that every child has access to education. Mr. Kailash Satyarthi, Chairperson of Global March Against Child Labour and Founder of Bachpan Bachao Andolan, said, "We have found a strong global leader in Gordon Brown. The fight against child labour urgently needs strong leadership at local, national and global level; and it has to revitalise a worldwide movement to attain the commitments of the Roadmap 2016 (for the elimination of the worst forms of child labour) and Education for All by 2015."

Moved by Razia’s praiseworthy efforts of connecting every child in her village with education and ensuring that each child studies and does not work, Mr. Brown stated that he was reminded of 14 year-old Malala Yousafzai, the young education activist currently recovering in the U.K. Mr. Brown expressed that he would share Razia’s story of courageous efforts for education with Malala’s father, whom he will be meeting later this week in Pakistan. To promote education and further the work that young activists like Malala are doing, Mr. Brown shared that November 10th 2012, Saturday is being celebrated as Malala Day. On this day, 1 million signatures will be delivered to the President of Pakistan in support of education, particularly for girls.