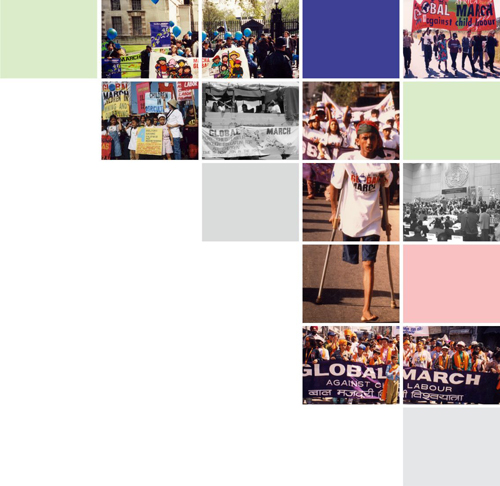 16 January 2013: Basu, a core marcher of the worldwide physical march against child labour organised in 1998 reflects, “I joined the Global March as the youngest core marcher, all of 9 years then. Today, after 15 years, I am amazed and delighted to see how the global march movement has spread so fast and so widely to impact and touch the lives of millions of children like me.”

Fifteen years ago, on January 17, 1998, the Global March movement started with an 80,000 km physical march when thousands of people marched together to put forth the message against child labour and slavery. Joined by trade unions, teachers’ organisations, child rights organisations and children, the march crossed 103 countries, building immense awareness for ending child labour. Back then, in 1998, the state of child protection from exploitation, trafficking and slavery was rather different from what we see today. Child labour itself was not acknowledged, either in social or political domains, and was considered acceptable and a norm for children from poor and vulnerable backgrounds.

Further, despite the pervasiveness of child labour across the globe, with more than 250 million child labourers, there was no singular international legislation for tackling its worst forms, coupled with a lack of a collective campaign to push for its elimination. But Global March, which started with a small group of motivated partners and was later joined by many more during the course of the last 15 years, helped to bring about significant changes. The physical global march of 1998 led to a renewed worldwide campaign to end child labour which facilitated the formulation and adoption by the International Labour Organization (ILO) in 1999 of ILO Convention No. 182 on elimination of the Worst Forms of Child Labourto supplement ILO Convention No. 138 on minimum age for admission to employment. Convention 182 has been the fastest ratified ILO Convention with 177 country ratifications. Convention 138 has leapt from fewer than 50 ratifications in the 1990s to 165 today.

There has been a remarkable progress in the fight against child labour during the last 15 years. New laws, policies and programmes have been launched with a high level of engagement of society, state and business. But this is not enough. Global March is committed to making child labour history. Therefore, we call for reinvigorated action, political will, corporate accountability and renewed efforts for education,” remarked Kailash Satyarthi, Chairperson, Global March Against Child Labour.

Earlier there was a lack of policy coherence and understanding of inter-linkages of child labour with poverty, lack of decent work and education. But over the years, there has been a paradigm shift in the approach towards child labour and it has been recognized as a socio-economic issue with linkages to other development issues. In 2005, the Global Task Force on Child Labour and Education was established with Global March as one of the founding members along with Education International, ILO, UNICEF, UNESCO and the World Bank, to work on the inter-linkages between child labour abolition and education for all. With such efforts, child labour has now come to be recognised as an obstacle for the achievement of the Education for All goals, Universal Primary Education and other Millennium Development Goals.

“Education International and its member organisations are committed supporters of the international struggle against child labour. Since the foundation of the Global March Against Child Labour 15 years ago, teachers and their organizations have been at the core of the Education For All and child labour elimination initiatives and will continue to be committed to this cause,” said Susan Hopgood, President, Education International.

Constance Thomas, Director of the ILO's International Programme on the Elimination of Child Labour, said,  “On this 15th anniversary, IPEC recognises the continuing leading role of the Global March as the largest trade union/NGO alliance in the worldwide movement against child labour. We share the view that the struggle against child labour means tackling its root causes as well as advocating for appropriate, immediate action. Today, IPEC is pleased to be partnering with Global March in work to promote child labour-free communities, to tackle child domestic labour and child labour in agriculture, and in the global campaign to ensure all children have access to quality, basic education.”

As regards child labour in agriculture, it was seen as a traditional activity and invisible as most of the work childrendid was consideredas “helping out” on family farms. But, now the hazardous work of 129 million children in agriculture is being recognised and is receiving long-due attention from policy makers, international development organisations, etc. To put this neglected issue of work by children in agricultural and rural settings on the global policy agenda, Global March facilitated development of a common agenda and action on child labour in agriculture, through the International Conference on Child Labour in Agriculture, organised in 2012.

Child Labor Coalition, said: "The Global March has made significant progress in bringing awareness of child labor issues world-wide in the past fifteen years, and even though there has been progress in the United States, more work needs to be done.  Domestically in the U.S., occupational death rates for teen workers have fallen in half over the last 15 years.  We were losing about 70 a year 15 years ago and now we are under 30.  That said, challenges remain:  the Obama administration’s disappointing withdrawal of the occupational safety rules, leading Republican politicians questioning long-standing child labor rules, weakening of state rules and enforcement in several states, and the failure of Congress to advance the Children’s Act for Responsible Employment which would end exemptions that allow children working in agriculture to receive fewer protections thank children working in other sectors.  Addressing these issues remains an important priority for the Global March and its American member, the Child Labor Coalition."