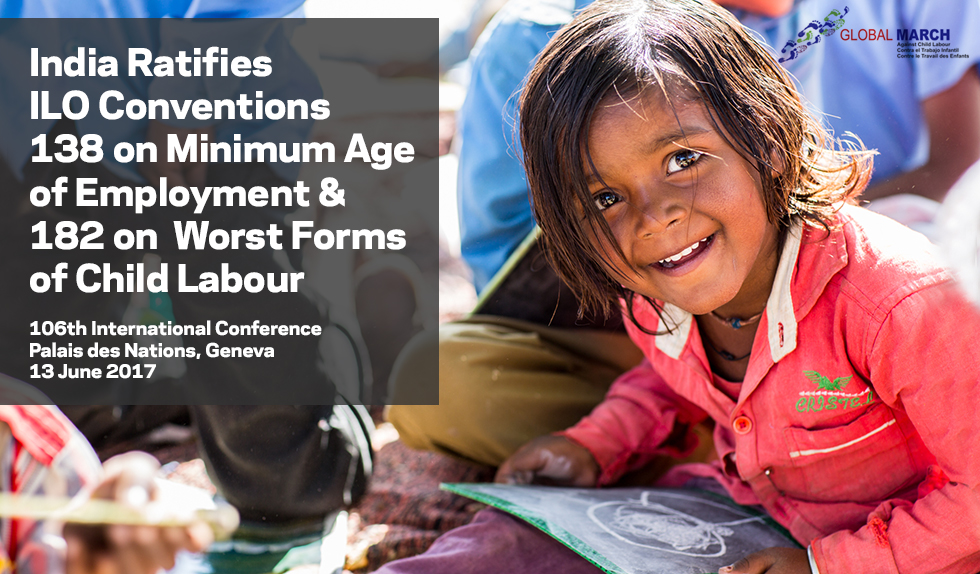 ndia has ratified ILO Conventions 182 and 138 which will bring 20 per cent more of the world’s children under the protection of these two conventions and a give a better future to the vulnerable and at-risk children as they win the right to education in school.

The Government of India has ratified the long awaited International Labour Organization (ILO) Convention 182 on the Worst Forms of Child Labour and Convention 138 on the Minimum Age of Employment after the Union Cabinet gave its approval for ratification on the 31st of March 2017. India's decision for ratification of these Conventions was long overdue in providing justice to millions of working children and is a significant opportunity for the country to make renewed commitment for ending forced labour, modern slavery and human trafficking.

After the total prohibition of child labour through enacting a stronger legislation - Child Labour (Prohibition and Regulation) Amendment Act 2016, this is yet another significant step in protecting the country’s children from exploitation and abuse. Nobel Peace Prize Laureate 2014 and Honorary President of Global March Against Child Labour, Kailash Satyarthi has been a long-time advocate for ratification of these ILO Conventions and has been raising awareness on the issue through 'Global March Against Child Labour' which began in since 1998.

“I recall the day when I conceived this idea to demand an international law on the abolishment of modern forms of slavery, sale and trafficking of children, forced or compulsory labour and the usage of children in conflict, for pornography and for procuring and doing other illicit activities such as drug trafficking. We conceptualised a march which would travel through 103 countries and across 80,000 kms to culminate on June 01, 1998 in Geneva where the International Labour Organization (ILO) was meeting for its conference.

Millions across the world walked together to demand a strong international law to protect vulnerable children.  I remember distinctly the children who joined us from Nepal, Pakistan, Vietnam, Brazil and many such countries.  Their presence in the seminar hall where the delegates were meeting made all the difference.  The innocent yet powerful voices of the children could not be ignored and reflected in the draft of the ILO Convention 182 on the worst forms of child labour.

A year later, in June 1999, the ILO unanimously adopted the Convention.  It was the first time that a Convention or treaty had been adopted with the full support of all members.  Over the years, I have spearheaded its ratification by member nations.  With 180 countries having already done so, it has also become the fastest ratified Convention in the history of ILO.  The involvement of these countries in the Convention clearly shows that support for the movement against child labour is gaining momentum worldwide.

Now after nearly two decades, I am overjoyed that India has also decided to ratify the Convention. I congratulate our Honourable Prime Minister Shri Narendra Modi and the Ministry of Labour and Employment. The decision to ratify Convention 182 and Convention 138 was overdue in providing justice to our children. After the total prohibition of child labour, this is an important step in protecting all our children from exploitation and abuse. It is now the collective responsibility of everyone to ensure its implementation.”

Founded by Mr. Kailash Satyarthi, Global March Against Child Labour (Global March) began in 1998 with an 80,000 km physical march that was joined by 7.2 million marchers from around the world to demand for an international instrument against the worst forms of child labour. The voices of the marchers were reflected in unanimous adoption of the ILO Convention 182 on the Worst Forms of Child Labour, and the Convention 182 has since become the fastest ratified Convention in the history of ILO. Notably, only a few Pacific Island countries and Eritrea remain to ratify this Convention.

Global March commends the government and the Ministry of Labour and Employment on their stance and pro-active efforts to eliminate child labour and exploitation by enacting Child Labour (Prohibition and Regulation) Amendment Act 2016 which proposes complete prohibition of employment of children up to the age of 14 years while banning employment of children between 15-18 years in hazardous works, in tandem with India’s Right of Children to Free and Compulsory Education Act, 2009.

"The leadership that the Indian government is showing by moving ahead with the ratification of ILO Conventions 138 and 182 is laudable and an example for not only the region but other countries around the world.  It is also a testament to the Indian campaigners who started this long march almost 20 years ago and are now seeing a key element of their vision realised." said Timothy Ryan, Chairperson, Global March Against Child Labour.

13 June 2017, will be marked in history as the one of the most important dates in the fight against child labour, when India finally ratifies the two ILO Conventions, honoring the message that the World Day Against Child Labour (held on 12 June) signifies for the world, guided by the the principles enshrined in these two Conventions of ILO. This year the day was dedicated to the impact of conflicts and disasters on child labour globally. (Click to read more about impact of Conflicts and Disasters on child labour).