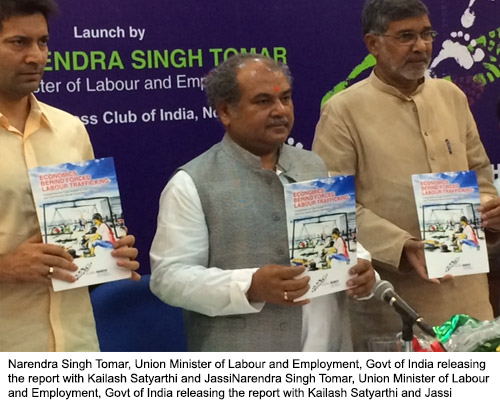 “I dedicate my one month’s salary to Bachpan Bachao Andolan to carry out this noble cause to end child labour in India,” pledged Minister Tomar.

“This government which has been elected with a clear mandate has already shown tremendous commitment to the elimination of poverty and this elimination of poverty is going to contribute to elimination of child labour. However, those exploiting these children must also be punished, and they must be punished with a legal deterrent. History has witnessed that former child labourers who have been rescued have gone on to do tremendous things for society. In India if we have to create a better future for our children, we have to protect all children. This government is totally committed for the total elimination of child labour from India, and it is going to do everything that is possible whether it is through making new laws or enforcing the existing laws, or changing the perceptions of the society,” committed Minister Tomar.

The “Economics Behind Forced Labour Trafficking” report uncovers the garish realities of forced labour, focusing on trafficking of children for child domestic labour (CDL) and commercial sexual exploitation (CSE). Using a data-driven approach the report gives strong statistical evidence to highlight the extent and movement of money involved in CDL and CSE.

The report is based on a sample consisting of 420 cases of child domestic labour and 196 cases of commercial sexual exploitation victims across India, Nepal and Bangladesh.  A key point emerging from the report is that the costs of human trafficking on the economy are staggering. An unnoticed illegal monetary pool of anywhere between US$ 35 to US$ 360 billion is generated through the exploitation of victims of child domestic labour and commercial sexual exploitation in India accounting for approximately 2 to 20% of India's GDP. If a conservative estimate is taken, then as per the report, the amount of illegal money generated for just one victim of CSE in a brothel per year can range between INR 3 - 14 lakhs, amounting to US$ 30 - US$ 343 billion from brothels only in India.

Speaking at the launch, Kailash Satyarthi, Chairperson Global March said, “It is a shocking revelation that 360 billion USD or 21 lakh crores Indian rupees are generated by enslaving young girls in brothels and homes that is equivalent to one fifth of the country's GDP. This black money propels capital corruption and most heinous crimes against girls and women. The dream of development and scandal of child slavery cannot co-exist. Time is running out. It is now or never. We welcome the new government’s assurance towards zero tolerance for violence against girls and women.”

Commenting on the report S Suresh Kumar, Joint Secretary (CS), Ministry of Home Affairs, Government of India said, “The costs of human trafficking on economy are staggering. People think it is cheap labour. But, the economic cost to combat human trafficking is far more advantageous than letting it subsist.” 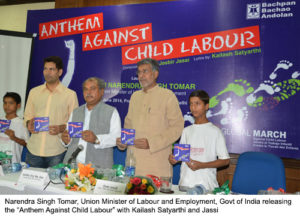 The “Anthem Against Child Labour”, the lyrics for which were first written by Kailash Satyarthi during the historic global march of 1998 has been composed and sung by celebrated folk/pop singer Jasbir Jassi.  Jassi on the release of the music said, “Sports and music bind people. This anthem is my small contribution to the fight against child labour. And I promise to continue. I will promote this song and I urge the media to promote this song like the other commercial music.”

“Anthem Against Child Labour is not merely a song, but the musical spark to liberate shackled innocence and robbed childhood. It is the loudest chorus to unite all voices, minds, and souls for emancipation from child slavery. My feelings and emotions along with the children’s quest for freedom have been brought alive by noted singer Jassi’s magical voice and reverberating music,” said Satyarthi

Global March and its partners are organising events across the world to commemorate the 12 June, World Day: