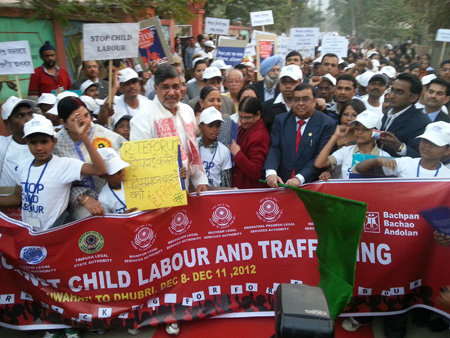 10 December 2012 – This year’s theme for Human Right Day is “My Voice Counts”.  This day presents an opportunity, every year, to celebrate human rights, highlight a specific issue, and advocate for the full enjoyment of all human rights by everyone everywhere .

Today’s urgent issue of child trafficking and child labour needs attention especially in India where the maximum numbers of child labourers exists. India is on urge of passing the bill banning child labour for under fourteens and hazardous work for under eighteens.

Making their voices count are former child labourer and survivors of child trafficking in the North Eastern state of Assam in India.  They are leading the March Against Child Labour and Trafficking since 8 December 2012, demanding an end to child labour and trafficking of children for forced labour, and the adoption of the new child labour law by Indian Parliament.

On 8 December at Guwahati, the Chief Justice of India flagged off and marched on the streets adding his voice to the loud slogans by the former child labourers and survivors of trafficking, a first ever. With Chief Justice Altamas Kabir of India, were Justice D K Jain of Supreme Court, and judges from Assam.

The March Against Child Labour and Trafficking is being organised by Global March partner Bachpan Bachao Andolan and supported by the Global March and Assam State Legal Services Authority.

Child and Adolescent Labour Abolition Bill abolishing child labour for persons less than 14 years, was approved earlier in August by the Indian cabinet.  Following sustained campaigns and actions by the Global March Against Child Labour and its partners in India, the Minister for Labour and Employment Mallikarjuna Kharge agreed to the revisions in the child labour law at the National Consultation on Child Labour on 11 May 2012, New Delhi organised by Global March Against Child Labour.  The Bill is waiting to be voted by Indian Parliament. This is inspite of 66 Members of Parliament signing in support of the amendments, leading movie actors and sportsmen voicing their support and more than 150,000 people joing the campaign for a Child Labour Free India.

It is the time of urgency and we need your support to outlaw all child labour and help every child go to school in India. This is your opportunity to “Make Your Voice Count” sign the petition at http://educationenvoy.org/.